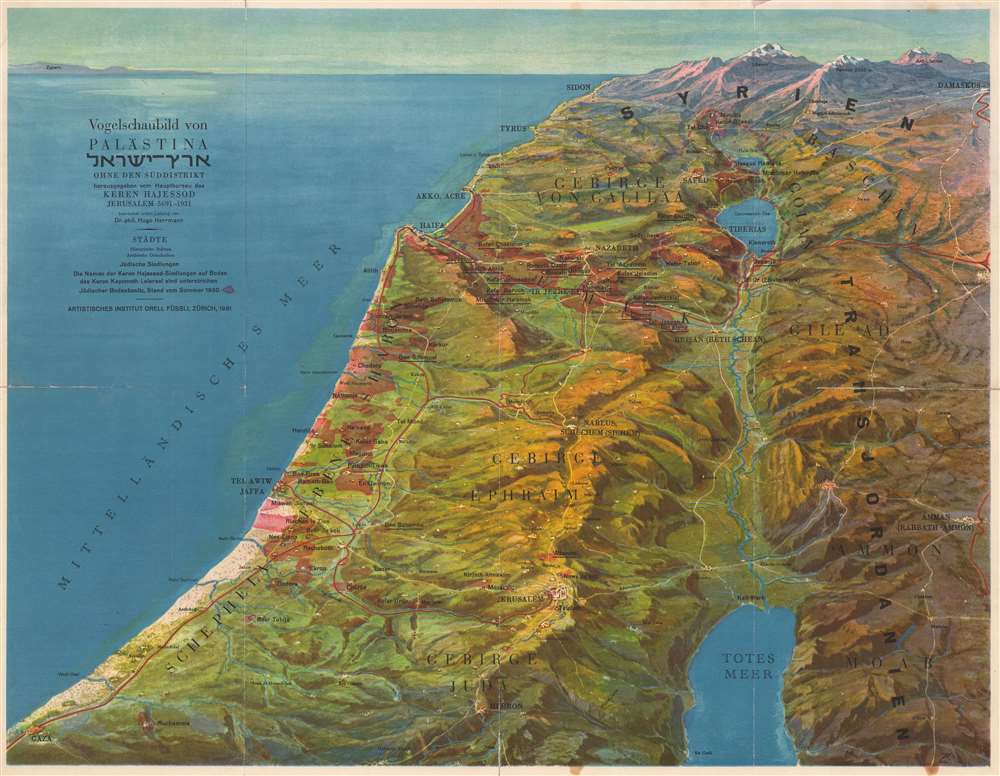 A brightly colored and wonderfully detailed piece, this 1931 Hugo Herrmann bird's eye view of Israel / Palestine illustrates the region from the south, stretching from Hebron and Gaza to Damascus and Sidon. The Mediterranean Sea is on the left and Amman, Jordan is included along the right border. Jerusalem and the Dead Sea are illustrated in the foreground. Tel Aviv, Jaffa, Haifa, Nazareth, Acre, and Tyre are all labeled.

This map was edited by Dr. Hugo Herrmann and published by the Artistisches Institut Orell Füssli in Zurich in 1931. It was created in the offices of Keren haYesod, an official fundraising organization for Israel. Founded in 1920 at the World Zionist Congress in London, the organization has since established branches in forty-five countries.

Dr. Hugo Hermann (1887 - 1940) was a Czech author, journalist, and Zionist activist primarily remembered for his political activism, but he was also an gifted analyst of German and Italian literature. Born in Moravská Trebová in what was then Austria-Hungary, Herrmann grew up in an assimilated German-speaking Jewish home. He attended universities in both Prague and Vienna and studied German and Romance philology. It was during his time as a student that he developed an interest in Zionism. Hermann served as secretary of the Zionist Organization of Bohemia from 1909 though 1912, and held the position of chairman of the Bar Kochba Association, a Zionist group in Prague, from 1909 until 1910. After completing his dissertation, Hermann briefly taught at a gymnasium before becoming the editor of Selbstwehr (Self-Defense), a Zionist political and literary weekly in Prague. He also served as editor in chief of the Jüdische Rundschau (Jewish Review), the main newspaper of the German Zionist Organization, from 1913 until the beginning of World War I. In 1925, Hermann wrote Eine werdende Welt (An Emerging World) describing his impressions after his first trip to Palestine. He later published works discussing the Arab Question in Palestine, a textbook on Palestine, and a work entitled Palästine Wie es wirklich its (Palestine as It Really Is). He moved to Palestine in 1934 and published two works while living there. His final publication, a semiautobiographical work, continues to be regarded as one of the best sources for the study of recent generations of rural Jews in Bohemia and Moravia. Hermann died in Jerusalem.