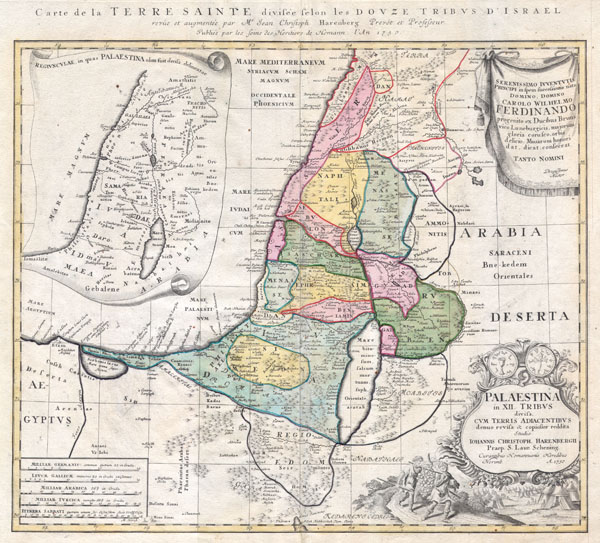 This is one of the Homann Heirs finest and most appealing maps of Palestine / Israel / The Holy Land. Depicts the region divided into the 12 Tribes of Israel. In the right hand corners there are two title cartouches. The lower is exceptionally decorative and depicts with two spies of Moses bearing the fruit from the Promised Land to the Hebrew camp, as well as the front and back of an ancient shekel coin. The upper left quadrant offers an overview of the region as a whole. The upper right features a dedication from the mapmaker to Karl Wilhelm Ferdinand, the future Duke of Braunschweig-Wolfenbüttel and Braunschweig-Lüneburg (from 1773). This map was drawn by Johann Christoph Harenberg.for inclusion the 1752 Homann Heirs Maior Atlas Scholasticus ex Triginta Sex Generalibus et Specialibus…. Most early Homann atlases were 'made to order' or compiled of individual maps at the request of the buyer. However, this rare atlas, composed of 37 maps and charts, was issued as a 'suggested collection' of essential Homann Heirs maps. A fine copy of an important map.