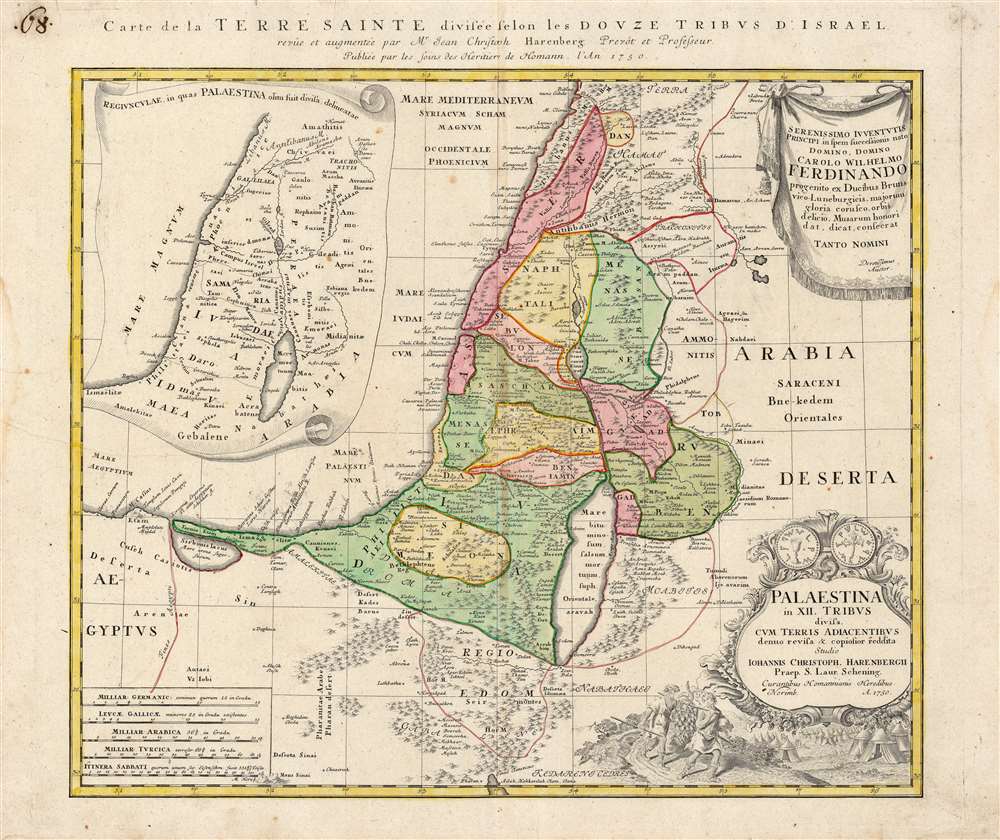 This is an interesting and appealing 1750 map of the Holy Land, printed by the Homann Heirs firm on behalf of the German theologian and historian Johann Christoph Harenberg (1696 - 1774). The map focuses on the land of Canaan, as divided between the 12 Tribes of Israel, presenting the Biblical place names in a modern geographical framework. An inset in the upper left illustrates the provinces in which the region of Palestine would later be divided during the Roman era (Judaea, Samaria and so on.) Thus, the map is applicable for the student of both the Old Testament and the New.

In the upper right, Harenberg dedicates the map to Karl Wilhelm Ferdinand, who would eventually become Duke of Braunschweig-Wolfenbüttel. Around 1735, Harenberg became General supervisor of schools in that province, making the dedicatee a sensible choice. The title cartouche in the lower right is surmounted by the obverse and reverse of an ancient Shekel. Below is a depiction of the Biblical passage (Numbers 13:17-23) in which two of Moses' spies sent into Canaan return with a bunch of grapes so large that it had to be carried by two men; in the foreground the spies schlep the mass of fruit to the camp, spreading into the distance.

This map was drawn by Johann Christoph Harenberg, and engraved by Homann Heirs for inclusion in their 1752 Maior Atlas Scholasticus ex Triginta Sex Generalibus et Specialibus… The map is well represented in institutional collections.


Johann Christoph Harenberg (April 28, 1696 - November 12, 1774) was a German Protestant theologian and historian. His most notable efforts concerned the history of Gandersheim and Bible exegesis. Born to a farming family, he was educated at the gymnasium in Hildesheim. He went on to study theology and eastern languages at the University of Helmstedt, and in 1719 continued his labors at the universities of Jena and Halle. Upon completion of his collegiate work in 1720 he became rector of the Stiftsschule in Gandersheim, resulting in his 1734 Historia ecclesiae Ganderhemensis cathedralis ac collegiatae diplomatica. (It was during this time that he also wrote his 'Vernünftige und Christliche Gedancken über die Vampirs,' a rationalistic approach to widespread contemporary reports of vampirism.) In 1735 he became general supervisor of schools in Brunswick-Wolfenbüttel, and he became a member of the Berlin Academy of Sciences in 1738. Works later in life would lean more on biblical history. Learn More...