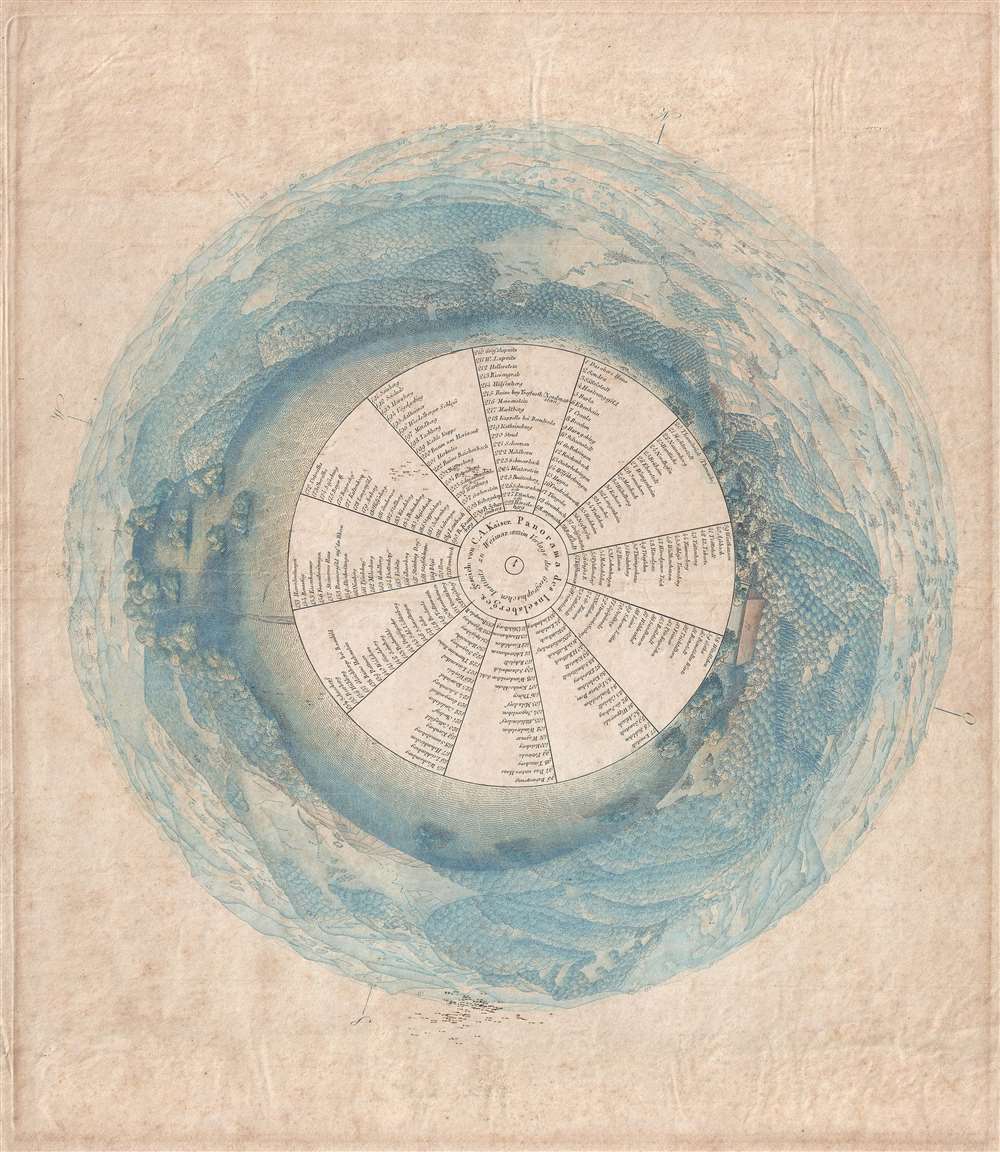 A 360-degree view from the top of the Großer Inselsberg in the Thuringian Forest in Germany.

This is an 1823 C.A. Kaiser panorama view from the top of the Grosser Inselsberg, the highest mountain in German's Thuringian Forest. A fully 360-degree view colored a brilliant blue, 228 different locations are numerically identified within the view and correspond to an index organized in wedges surrounding the view's center. The view itself illustrates the mountains and trees surrounding the Großer Inslelsberg, along with numerous towns, villages, and other locations.

From the 19th century, the mountain has been one of the best known excursion destinations in Thuringia. Its summit is crossed by the traditional mountain path Rennsteig, whose route is shared here by the European long-distance hiking path E3 and the international mountain hiking path Eisenach–Budapest (EB). Today, a youth hostel, a restaurant and an outlook tower serve tourists.

This view was created by C.A. Kaiser and published by the Geographischen Instituts in Weimar in 1823. This view is extremely rare and we have been unable to locate any other known examples.

Geographisches Institut, Weimar (fl. 1804 - c. 1903) was a German map and globe publishing house and geographical research institute based in Weimar. The organization primarily focused on republishing and improving upon the works of earlier cartographers, including Kitchin, Jefferys, Carey, and others. In general, its publications are known for their fine engraving, attention to detail, historical accuracy, and overall high quality. The firm was founded in 1804 by Friedrich Justin Bertuch (???? - c. 1845) and, on his death, passed to his son Robert Froreip (???? - 1855), then to Louis Denicks of Luneberg, then in 1859 to Voigt & Günther, in 1883 to F. Arnd, from 1890 - 1893 to Julius Kettler, and in 1903 to Max Wedekind. During the institute's height in the early 19th century, most of its cartographic publication was overseen by Carl Ferdinand Weiland (1782 - 1847). The firm also employed the cartographers Franz Xaver von Zach, Adam Christian Gaspari, Heinrich Kiepert, Karl (or Carl) and Adolf Graef, Julius Kettler, Carl Riemer and Karl Christian Bruhns. Weimar was a logical place for a collective like the Geographisches Institut to arise; it was a cultural mecca in the German-speaking world in the late 18th and 19th centuries because of its liberal atmosphere and associations with figures like Schiller, Herder, and, above all, Goethe, who spent most of his adult life in the city. Learn More...