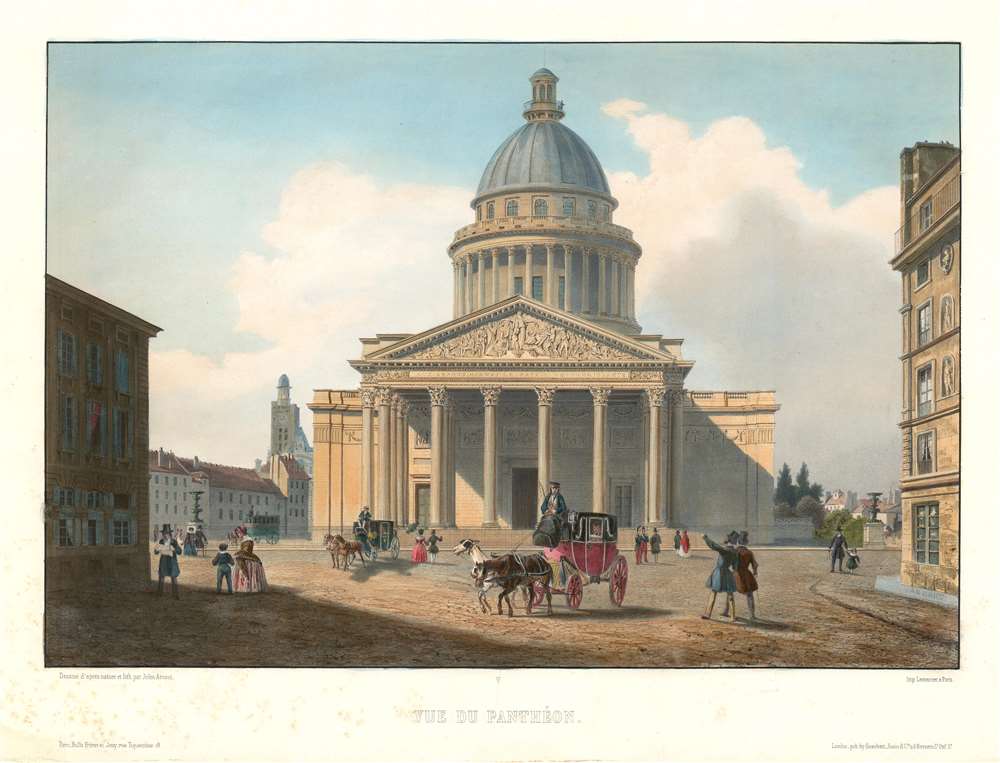 A wonderful view of the Panthéon in Paris - France's tribute to its most famous citizens.
$500.00

This is a c. 1845 Jules Arnout view of the Panthéon in Paris, France. The Panthéon, located in the Latin Quarter in the 5th arrondissement, was originally built as a church dedicated to St. Genevieve with the express purpose of houses the reliquary châsse containing her relics. The building was designed after a Greek cross with a massive portico inspired by the Pantheon in Rome. Construction on the Abbey of St. Genevieve, the patron saint of Paris, was completed in 1790. This, however, changed in 1791 during the French Revolution when the National Constituent Assembly declared that the Panthéon would be converted into a mausoleum for the internment of great Frenchmen. This secular monument has changed by to beig a church a handful of times, but today it plays the role of the burial place for French 'national heroes', some of whom include Voltaire, Rousseau, Alexandre Dumas, Jean Moulin, André Malraux, and Simone and Antoine Veil.

This view was drawn Jules Arnout 'd'après nature', which implies that he sketched the view while sitting in front of the Panthéon, printed by the Lemercier firm and published by Bulla Frères c. 1845. We are aware of only one example in institutional collections at the Musée Carnavalet in Paris, which is in black and white.


François Bulla (fl. c. 1814 - 1855) was a French engraver, printmaker, lithographer, and printer. Born in Tessin, Bulla opened his business at 98, Rue du Temple around 1814 and moved to 38, Rue Saint-Jacques in 1821. Bulla published a catalog of his work in 1838 entitled Catalogue général des estampes et lithographies compost le fond de F. Bulla, éditeur, quaint Saint-Michel, 25 that was printed by the Imprimerie de Ducessois. Bulla's business was described in the Bazar Parisien in 1826 in this manner:

Good. Even overall toning. Foxing. Soiling along bottom margin.
Looking for a high-resolution scan of this?