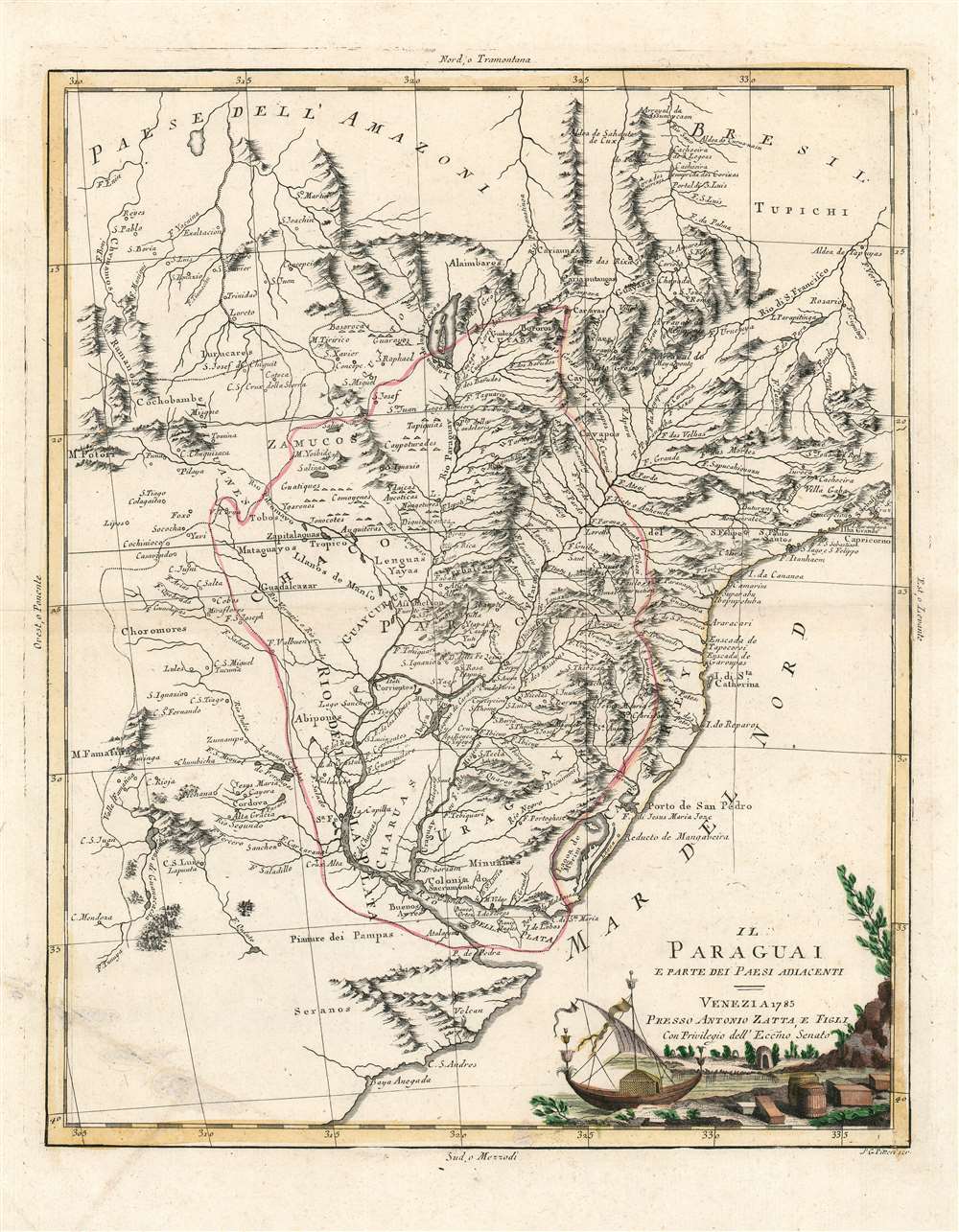 A beautiful example with unusual detail.
$350.00

Much of this map bears a strong resemblance to the 1771 Bonne map of Paraguay, and the two maps appear to share the bulk of their cartography from the 1758 d'Anville Amerique Meridionale. The focus of the Zatta is slightly to the west of that used on the Bonne, in order to include Potosi, the infamous mining city which for centuries was the location of the Spanish colonial silver mint. But beyond this, almost all detail to the west of the Rio de la Plata appears to derive from a different, unknown source, other than d'Anville. There are some areas that show similarity to Jesuit cartography of the first part of the 18th century but the provenance of Zatta's data here is anything but clear.

The map features a prominent Lake of Xarayes at the northern terminus of the Paraguay River. 'Xarayes' is a corruption of 'Xaraies' meaning 'Masters of the River.' The Xaraies were an indigenous people occupying what are today parts of Brazil's Matte Grosso and the Pantanal. When Spanish and Portuguese explorers first navigated up the Paraguay River, as always in search of El Dorado, they encountered the vast Pantanal flood plain at the height of its annual inundation. Understandably misinterpreting the flood plain as a gigantic inland sea, they named it after the local inhabitants, the Xaraies. The Laguna de los Xarayes almost immediately began to appear on early maps of the region and, at the same time, almost immediately took on a legendary aspect as the gateway to El Dorado. The presence on this map of an actual city overflowing with silver, Potosi, makes the presence of this fictitious treasure-source all the more puzzling.

Zatta's maps are notable for adhering to a uniform format, and happily this format included elegantly engraved and pleasantly colored cartouches. This one is no exception; it depicts a river scene, with a tiny, primitive hut, what appears to be a sailboat of reeds with remarkably modern rigging, and bales and barrels of trade goods piled upon the shore for the taking.

The map was engraved by Giovanni Pitteri for inclusion in Zatta's Atlante Novissimo. Perhaps a dozen examples of the atlas are catalogued in OCLC. The separate map does appear on the market, but is neglected completely as a separate map in institutional collections.


Giovanni Marco Pitteri (1703 - 1767 OR August 4, 1786) was a Venetian engraver of the late baroque period. He is best known for his portraiture, characterized by superb, dense and realistic shading. Little is known of his education though he its thought to have trained under Giovanni Antonio Faldoni. He was the engraver of dozens of maps executed for Antonio Zatta's 1784 Atlante novissimo, which benefited greatly from the artist's skill in the shading of topographical features, and in the map's artful cartouches. Learn More...