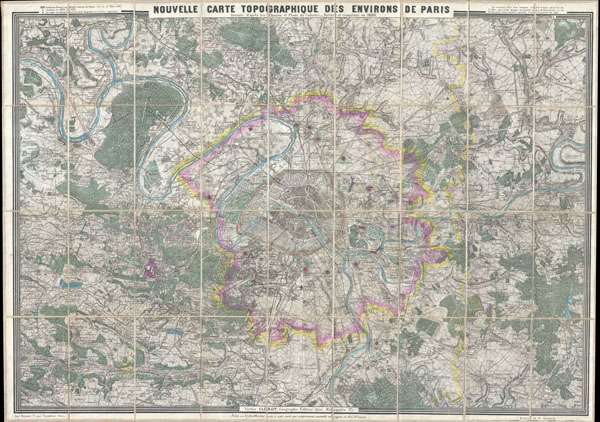 Issued in 1880 by Victor Clerot, this is one of the largest and most strikingly beautiful 19th century folding maps of Paris we have ever encountered. Details the greater Paris vicinity from the Bois de Marechaux in the southwest, Evesquemont in the northwest, La Grange in the southeast and Les Tillieres near Dammartin in the northeast. Map offers extraordinary detail throughout showing forests, fields, buildings, gardens, estates, temples, farms, rivers, roadways, trains, and topographical features. Gardens, forests, the Seine, and the official boundaries of Paris and beautifully colored in green, pink and blue pastels. The fortifications surrounding Paris, built following the Franco-Prussian War and the brief Paris Commune period (1870s), are particularly highlighted. This map was issued in case or pocket format, dissected into 36 sections, and laid on linen for easy folding.

Victor Clérot (fl. 1855 - 1890) was a Paris based geographer and publisher active in the latter half of the 19th century. As with most small volume French map publishers of this period there is very little available information regarding Clérot. We know he published several maps of Paris, a world map, some timelines, and a number of guidebooks, but little else. His offices were located at 23 Quai Malaquais in Paris's 6th Arrondissement. Learn More...

Very good. No notable flaws.
Looking for a high-resolution scan of this?