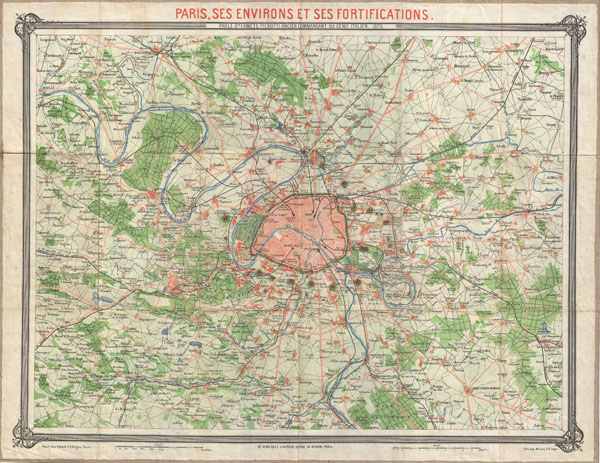 An unusual 1870 map of Paris, France, and its vicinity by Dr. Ermete Pierotti. Centered on Paris, this map covers the region from Longuesse to Solers and from Cernay to Marchemoret. Identifies countless towns, cities, forests and chateaux, including Versailles. Identifies rail lines, roadways, and local political divisions as well. Lithograph color. Engraved by Erhard and published by Ermete Pierotti from his office at 33 Rue de Beaune, Paris

Ermete Pierotti (fl. c. 1840 - 1875) was an Italian architect, mathematician, and engineer from Modena. Pierotti was the Commandant of the Italian Army Engineers (Genie Italien). From 1854 to 1861 he was assigned to Mustapha Surayya, the Ottoman Governor of Jerusalem. His assignment, which took him throughout Palestine, was to improve roadways and infrastructure in the region. In the process Pierotti composes several books on the culture, topography, and inhabitants of Palestine. He later retired to Paris, where is set up a small publishing concern. Learn More...