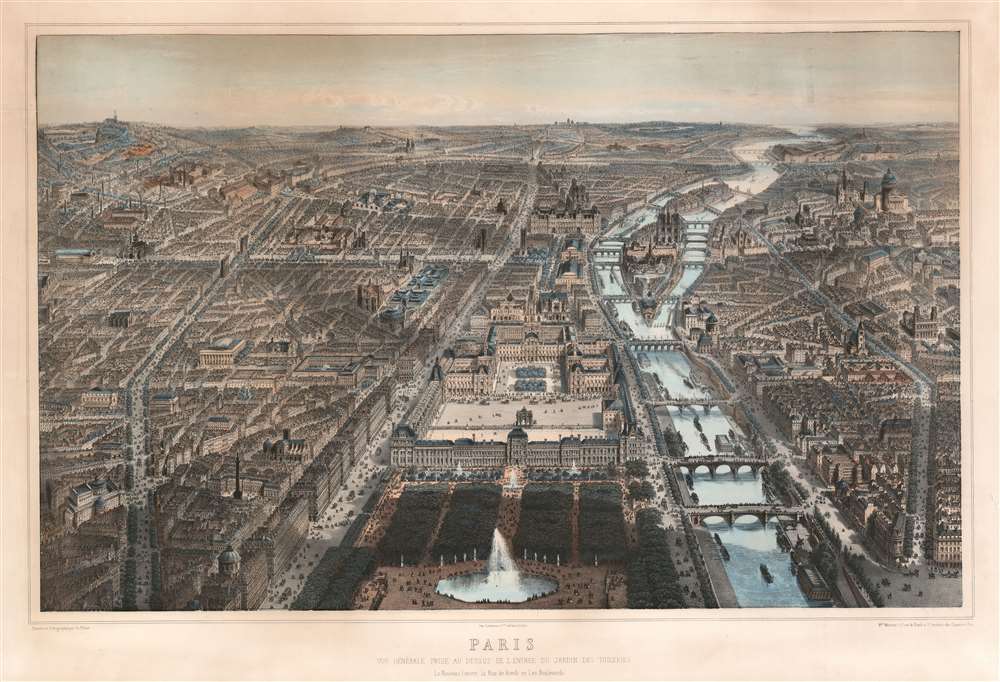 Paris after the Haussmann Renovations at the height of the Second Empire.

An utterly captivating 1867 large-format lithograph view of Paris by Michel-Charles Fichot and Rose-Joseph Lemercier. The view looks southwest on Paris from hypothetical position above the Bassin Octagonal in the Jardin des Tuileries. The Louvre appears front and center, with the Rue de Rivoli on its left and the Seine on tis right. Notre Dame and the Ile de Cité, the Hôtel de Ville, Tour St. Jacques, and other monuments are apparent.

There can be little doubt that this view as published to capitalize on general interest in the Paris associated with the 1867 Exposition Universelle. The Exposition Universelle was the second world's fair to take place in Paris, and was held from April 1 to November 3, 1867. Sponsored by Napoleon III, the 1867 Exposition Universelle followed the Georges-Eugène Haussmann renovation of Paris and marks the high-water mark of the Second French Empire (1852 - 1870). Note the broad avenues, here purposely exaggerated, the pride of Haussmann's (1853 and 1870) reimagining of Parisian public space. Through its entire run, the Exposition hosted some 50,000 visitors, most of whom came from outside of France. It had a major influence on art and culture globally, particularly in the rise of late 19th century orientalism and the Art Nouveau movement.

This view appeared in 1867. It was drawn and lithographed by Fichot and printed by Lemercier. There appear to be at least two editions, one entitled 'Paris en 1867' and the present view, which leaves off the date. It is possible that the dated view is smaller, but records of the view in any edition are scarce so this remains unclear. We have been able to identify only one institutional holding of this map, at the Bibliothèque Nationale de France.