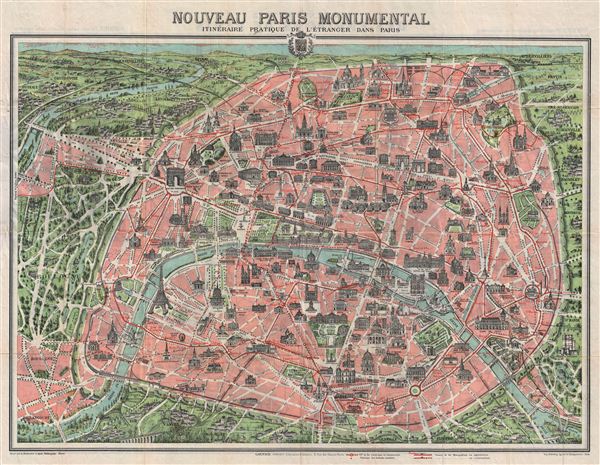 An iconic 1911 tourist pocket map of Paris, France. Presented as a same field birds-eye view, this map centers on the Seine River, and covers the embastilled heart of modern Paris. Although ostensibly designed as a subway map, this map offers much more, with important buildings and monuments shown in profile, including the eiffel Tower, the Arc de Triomphe, Sacre-Coeur, the Pantheon, etc. Paris itself is set as if in a verdant garden surrounded by the Bois de Boulogne and various suburban villages. In the north, under a blue sky rolling hills stretch indefinitely into Normandy and possibly the english Channel. Tom Conley, referencing the map in his brilliant discussion on cartographic influences in cinema describes it beautifully,

This map was issued in various editions from, roughly 1900 to 1937. Though most examples are undated we can assign an approximate date due to the development of the Metro system and the map's overall style and construction. In this expression of the map line 3 has been extended to run from Pereire to Porte de Champerret, an event that occurred on February 15 of 1911. This map helpfully also indicates lines that are under construction. For our purpose focusing on the Porte d'Auteuil extension of the 8 line, as yet unopened when this map was printed, fixes the publication date between 1911 and 1912. engraved by L. Poulmarie and printed by Dufrenoy. Published by Garnier Frères of 6 Rue de Saints-Peres, Paris.