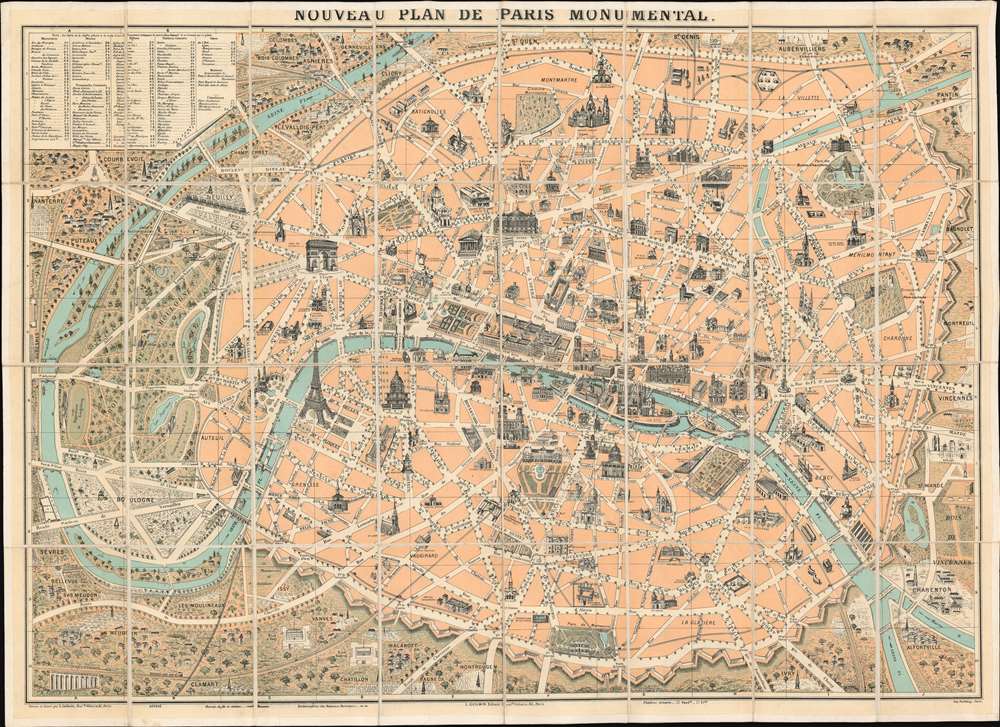 The monuments of Paris.

This is a c. 1890 L. Guilmin pictorial map of Paris featuring profile drawings of the French capital's world-famous monuments. Depicting the city from Nanterre and the Bois de Boulogne to the Bois de Vincennes, the recently constructed Eiffel Tower, the world-famous Louvre Museum, and the magnificent Notre Dame Cathedral are among the highlighted sites. Others include the Panthéon, the Jardin du Luxembourg, the Jardin des Tuileries, the Avenue des Champs Élysées, and many of Paris's train stations. The city is surrounded by its ancient walls, corresponding to the modern day Boulevard Périphérique is today.

This map exhibits the Theirs Wall, a defensive structure surrounding Paris. Shocked by the seizure of Paris by foreign enemies during the 1814 Battle of Paris, the French King at the time, Louis-Philippe (1830 - 1848), conceived of a board network of walls and forts he believed would make Paris impregnable. The project was met with immediate opposition, some of which claimed that the walls were not defensive, but rather intended to control Parisians in the event of an anti-monarchal rebellion. Nonetheless, under a plan prepared by Marshal General Jean-de-Dieu Soult (1759 - 1861), construction began in 1841. The completed fortifications, named the Thiers Wall after the French Prime Minister at the time, Adolphe Theirs (1797 - 1877), were, at enormous expense, completed in 1844. The walls were 33 kilometers long and consisted of 94 bastions, 17 gates, 23 minor road crossings, and eight railroad gates. By 1919, advancements in military technology made the walls obsolete, leading them to be fully deconstructed by 1929 and replaced with the Boulevard Périphérique.

This map was drawn, engraved, and published by L. Guilmin and printed by the Imprimerie Dufrénoy c. 1890. Guilmin published numerous different editions of his monumental maps of Paris, all of which possess unique details.


Eugène Dufrenoy (January 21, 1834 - 189?), aka Dufrenois, was a French printer, lithographer, and engraver active in Paris during the second half of the 19th and the early 20th centuries. Dufrénoy born in Bourg-la-Reine, in what is today the southern suburbs of Paris. He was based, for at least part of his career, at 34 Rue du Four, Paris. In 1881 Dufrénoy acquired a large space at 49 Rue du Montparnasse. This space still operates as a printshop with Dufrénoy's old presses as IDEM Paris. ˜ Learn More...

Very good. Dissected and mounted on linen in thirty-two (32) panels.
Looking for a high-resolution scan of this?