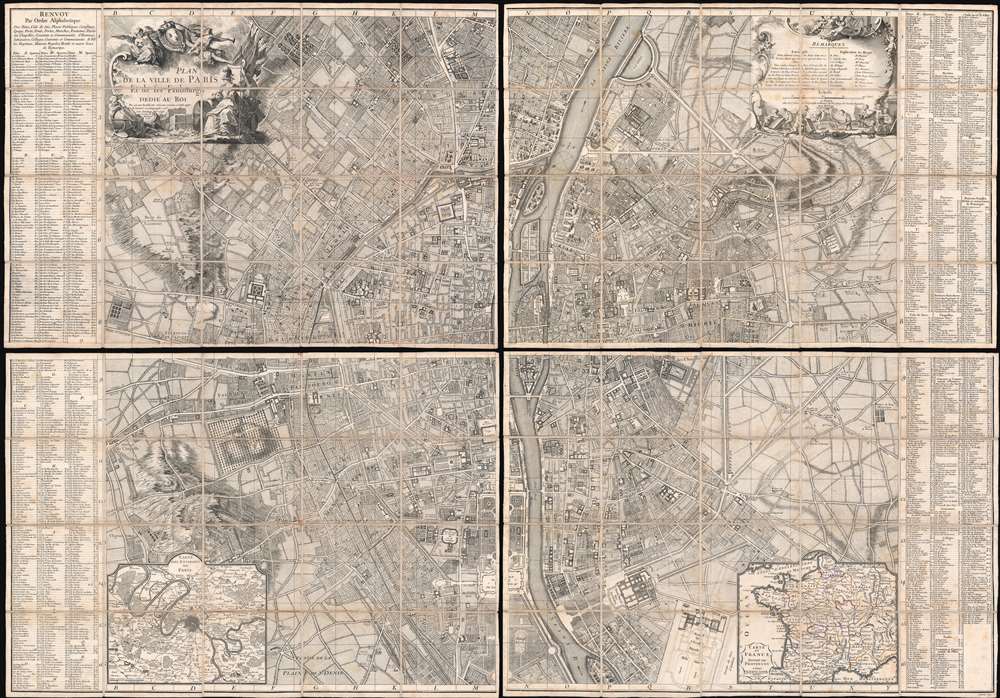 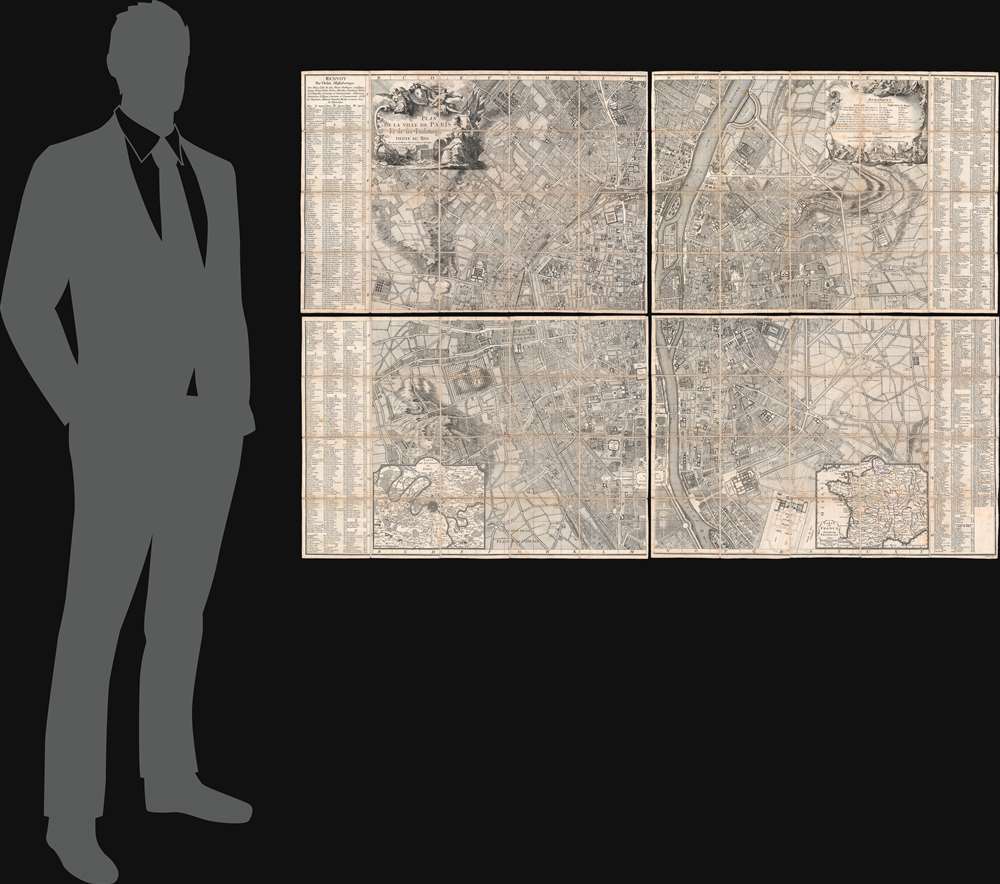 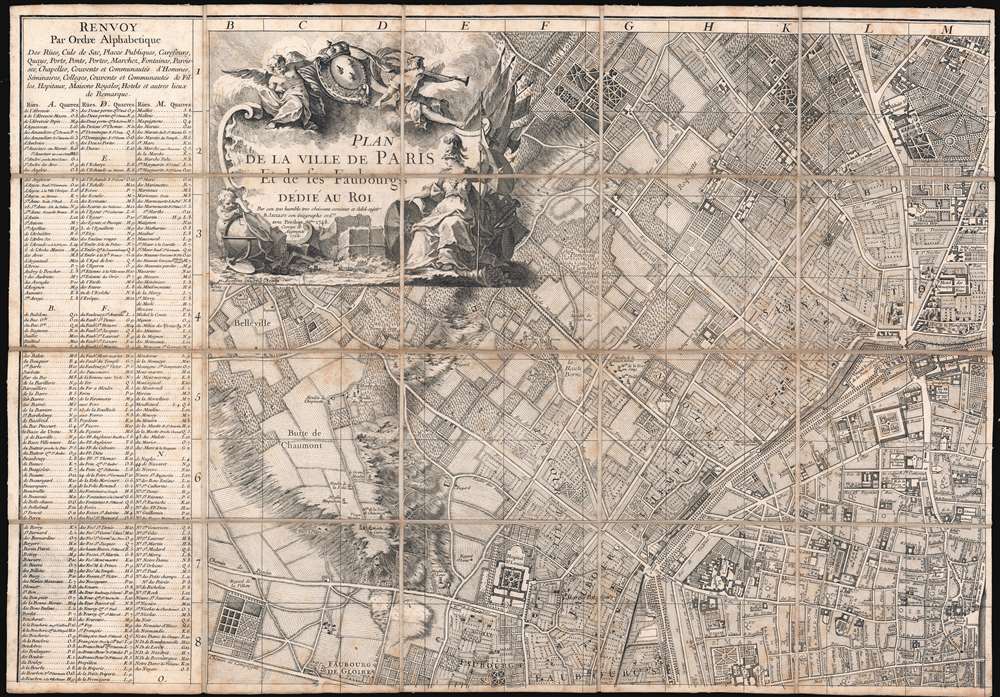 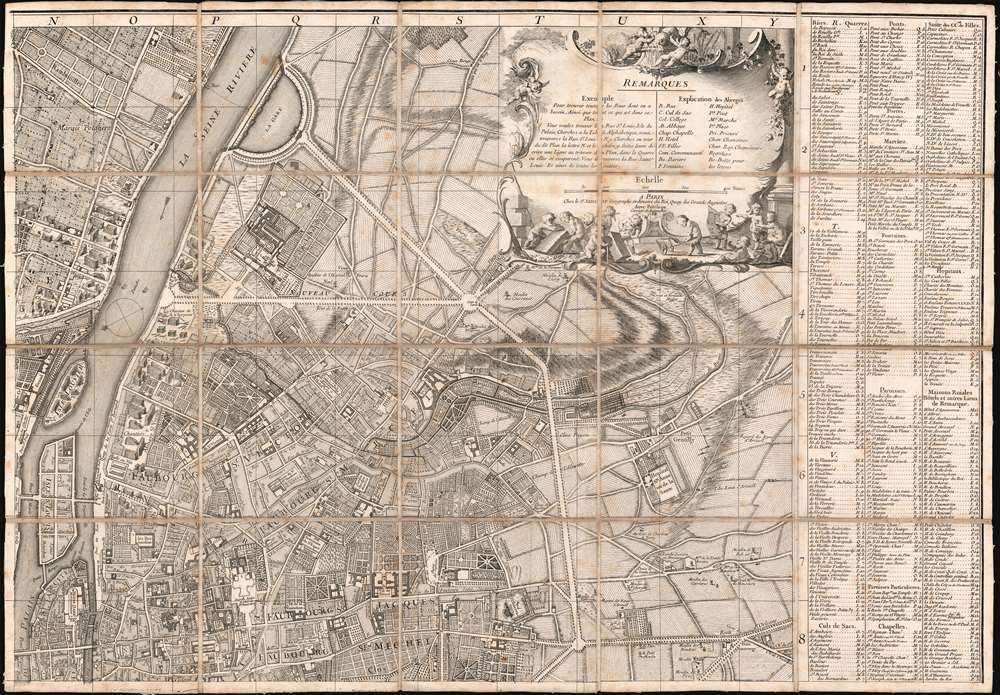 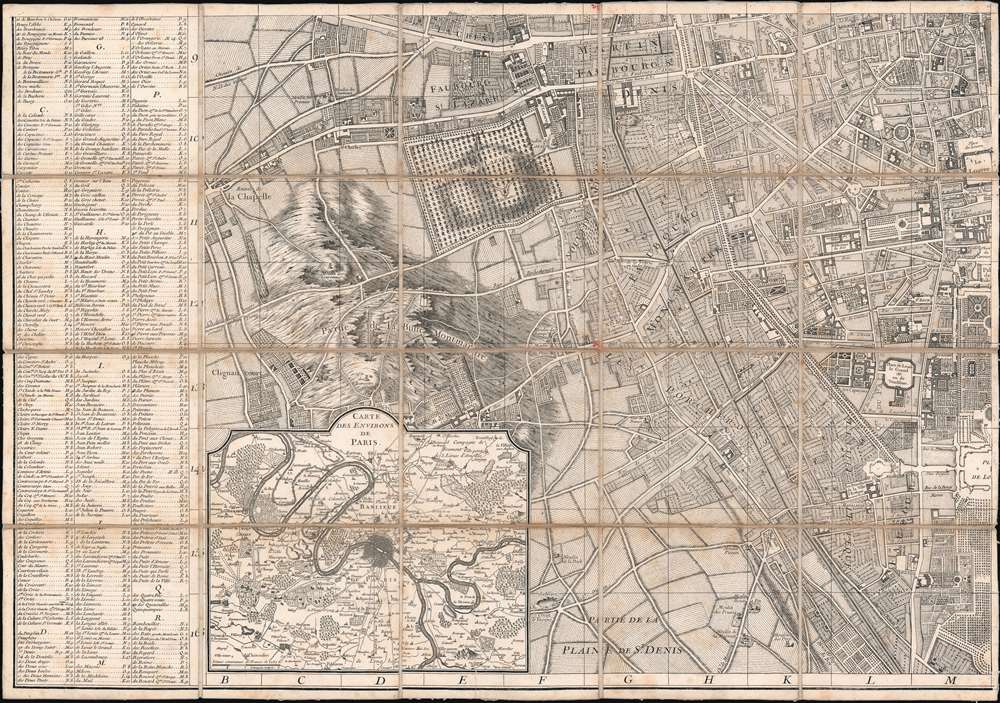 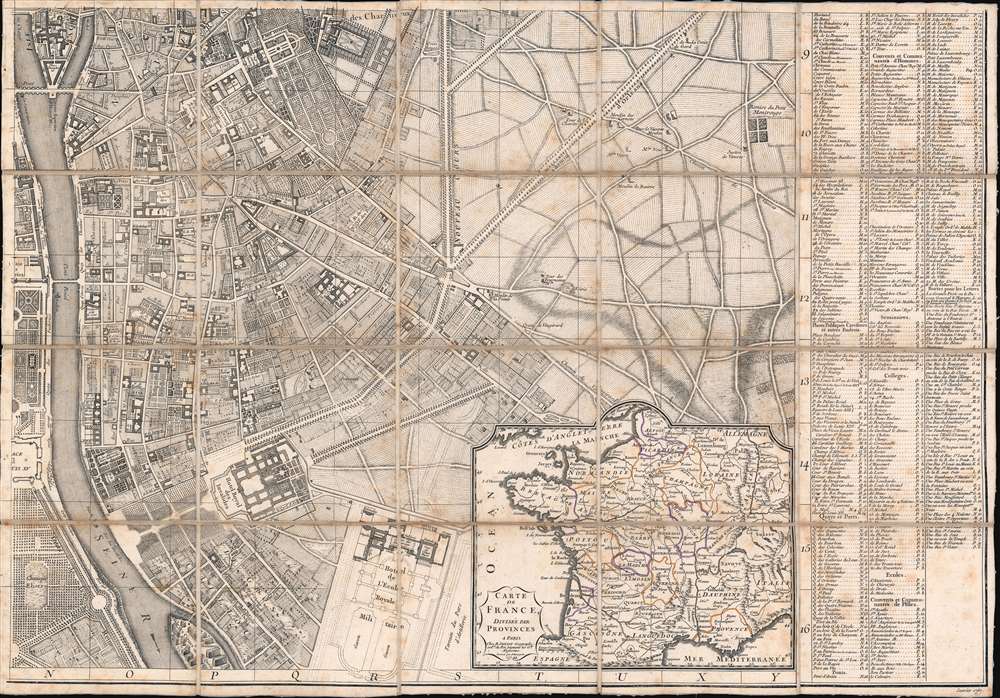 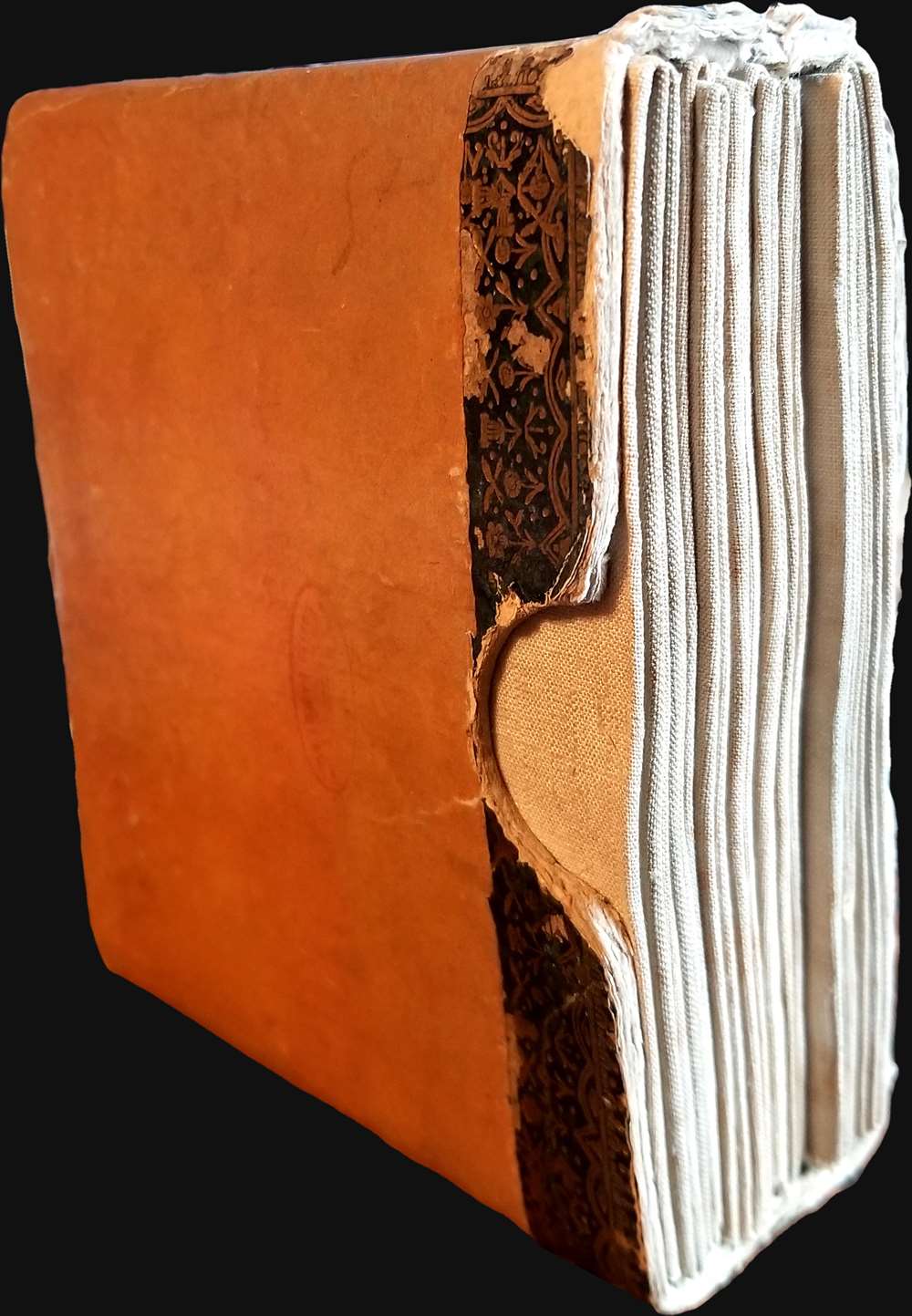 The only known example, in this edition, of Bernard-Antoine Jaillot's 1748/1767 large-scale map of Paris. The map is centered on the Île de la Cité and is oriented to the southeast, with the Seine running vertically through the center of the map - a convention established in 1713 by the author's father Bernard-Jean-Hyacinthe Jaillot and followed in 1736-8 by Louis Bretez, and again, here. Coverage extends from the Faubourg Saint-Antoine to the Île des Cygnes that (attached to the Champ de Mars in the late 18th century), and from the Faubourg de Glories to the modern-day 14th arrondissement. Elaborate allegorical cartouches by Pierre-Alexandre Aveline appear in the upper left and right and feature titling and a legend, respectively. In the lower-left and right, inset maps detail the environs of Paris and France in general. The main map is flanked on either side by an exhaustive index of streets and important civic, military, government, mercantile, and ecclesiastical centers.

Cartographic Context With the Bretez/Turgot

Cartographically this map closely resembles the 1713 plan also attributed to 'B. Jaillot', likely Bernard-Jean-Hyacinthe Jaillot (1673 - 1739), father to our current cartographer. That map was significant as the first large-scale map of Paris to include axonometric building elevation profiles - a convention brought to full fruition by Louis Bretez when constructing his 1739 map of Paris. The 'Louis Bretez's Plan', today better known as the 'Turgot Plan', is considered the greatest masterpiece of urban cartography ever made - nonetheless, it was not a commercial success. The present map deviates from the axonometric model, as epitomized by the 1738 Bretez/Turgot, instead embracing a more contemporary ichnographic model - illustrating the floor plan of great buildings, akin to the great Giambattista Nolli plan of Rome, also first issued in 1748.

If B. Jaillot … drew up the plan of 1713, one wonders why … he did not trace the buildings in elevation. Could it be the small success obtained by Louis Bretez's Plan, which encouraged him to give up a genre that was not very popular with the public? (our translation)

Certainly, this map follows in the lineage of both the 1713 Jaillot and the 1739 Bretez/Turgot. It shares a similar scope, orientation, and grandeur. It is a safe assumption that the convention of illustrating buildings with elevation profiles, introduced by Bernard-Jean-Hyacinthe Jaillot in 1713, but epitomized by the 1838 Bretez, would fall by the wayside due to the impossibility and impracticality of surpassing the Bretez/Turgot, and the impetus to produce more commercially-palatable plan. Or, it is possible that the axonometric model had simply fallen out of fashion, as it was also passed over by the Giambattista Nolli in his grand plan of Rome, issued in the same year as the present map. The number of editions (11) and longevity of the present map (1748 - 1784), compared to just one of the Bretez/Turgot, do indeed suggest it was a popular success.

This is an unknown state of an already rare map. Boutier catalogs 11 editions, from 1748 through 1784. This edition mostly closely resembles Boutier 258.E, of which no surviving examples are known, except here the date is in the bottom right instead of the bottom left, as noted in Boutier. So we will identify this as Boutier 258.E.2. Boutier's only reference for the 'E' state is the 1851 catalog of Alfred Bonnardot, Études archéologiques sur les anciens plans de Paris des XVIe, XVIIe et XVIIIe siècles, where it is described.

This map was first issued by Bernard-Antoine Jaillot in 1748, a year before his death. The cartouche was engraved by Pierre-Alexandre Aveline. The map was engraved by Antoine Coquart with the text engraved by letter engraver Pierre Bourgoin. Boutier catalogs 11 editions, from 1748 through 1784. All are rare, but the present seems to be an intermediate state related, but differing from, Boutier's 258.E. No other examples are known. A unique collecting opportunity.

Bernard-Antoine Jaillot (???? – 1749) was a French map publisher active in Paris in the first half of the 18th century. He is part of the prestigious Jaillot cartographic dynasty, his father is Bernard-Jean-Hyacinthe Jaillot (1673 - 1739), and grandfather Alexis-Hubert Jaillot (c. 1632- 1712). As both father and son published as 'B. Jaillot' or 'Bernard Jaillot', and both worked in the same style from the same offices on a Quai d'Augustins, they are often conflated and their separate work can be distinguished only by date and other tangential data. Like his father, Bernard-Antoine also held the position of Géographe Ordinaire du Roi. BnF data suggests he was born in the 18th century, but it is unlikely, has there are major publications positively attributed from 1717, which would be unlikely. Learn More...


Antoine Coquart (1703 - 1762) was a French engineer, topographical engraver, and draftsman active in Paris in the first half of the 18th century. Along with Claude Lucas (1685 - 1765), Coquart engraved the great Bretez/Turgot Plan of Paris in 1736 and the subsequent 1748 Jaillot Plan of Paris. He also engraved plates for the 1712 L'Histoire Traite de la Police by Delamare. Learn More...


Pierre Bourgoin (???? - 17??) was a French line and letter engraver active in Paris in the early to mid-18th century. His is best known for engraving map for great French cartographer Jean-Baptiste Bourguignon d 'Anville (1697 - 1782). Learn More...


Pierre-Alexandre Aveline (1702 - 1760) was a French engraver, portraitist, illustrator, and printmaker active in Paris during the first half of the 18th century. Aveline came from a dynasty of artist, including his father Pierre Aveline (1656 - 1722) and brother Antoine Aveline (1691 - 1743). He mastered copperplate engraving under his father and joined the Académie de peinture et de sculpture (Royal Academy of Painting and Sculpture) in 1737. In cartographic circles he was known for his excellent cartouche work. In addition, he well-known for producing finely engraved reproductions of poplar French paintings. Learn More...