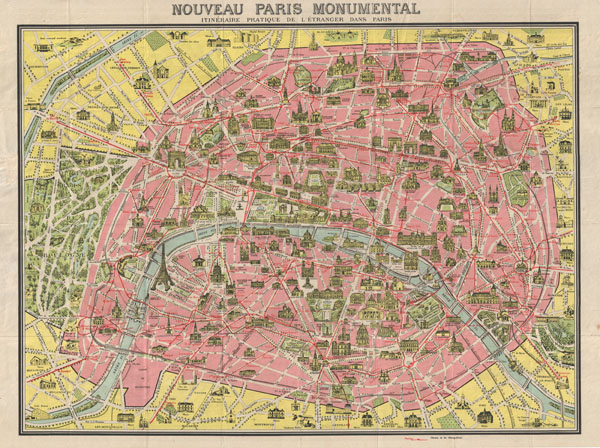 A later example of the famous 'Nouveau Paris Monumental' tourist pocket map of Paris. Covers Paris from the Bois de Boulogne to the Bois de Vincennes. Monuments and important buildings are shown in relief - including the Eiffel Tower. Also shows roadways and Metro lines. Though undated, the state of development of the Paris Metro, particularly the extension of the 11, suggests that this map must have been printed around 1920 - 1925. Verso offers a similar map of the greater Paris area extending as far as Chartres, Bray, Vignes and Beauvais. Folds into original, though battered, red paper binder

Very good. Minor wear on original folds. Map of the greater Paris vicinity on verso. Folds into original paper binder.
Looking for a high-resolution scan of this?