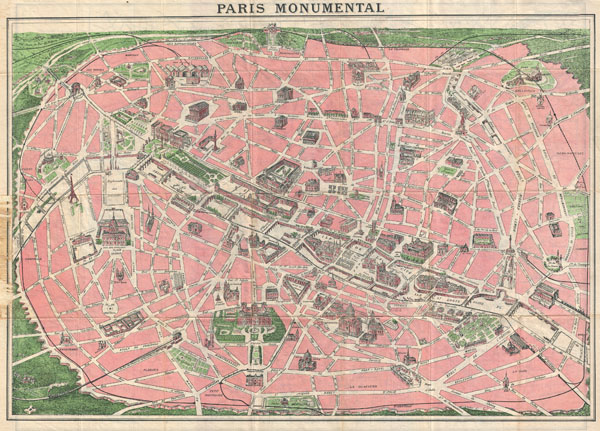 Attractive Art Deco Map of Paris and its monuments.

This is an extremely attractive 1926 tourist pocket map of Paris, France. Covers the old walled city of Paris and the immediate vicinity. Important buildings are shown in profile, including the Eiffel Tower, the Arc de Triomphe, Sacre-Coeur, the Pantheon, and others. Shows both the train and Metro lines throughout the city. This map was issued in various editions from, roughly 1900 to 1937. Though most examples are undated we can assign an approximate date due to the development of the Metro system and the map's overall style and construction. Attached to original red paper booklet which is itself split at spine. A similar map of the greater Paris environs appears on the verso. Published by L. Joly and A. Leconte, of 15 Quai Saint-Michel, Paris.

Good. Wear and verso repairs along some fold lines - especially at fold intersections. Some damage to left margin from the glue with which it was originally attached to booklet. Map of Paris Metro on verso. Comes with original booklet and Paris guide.
Looking for a high-resolution scan of this?