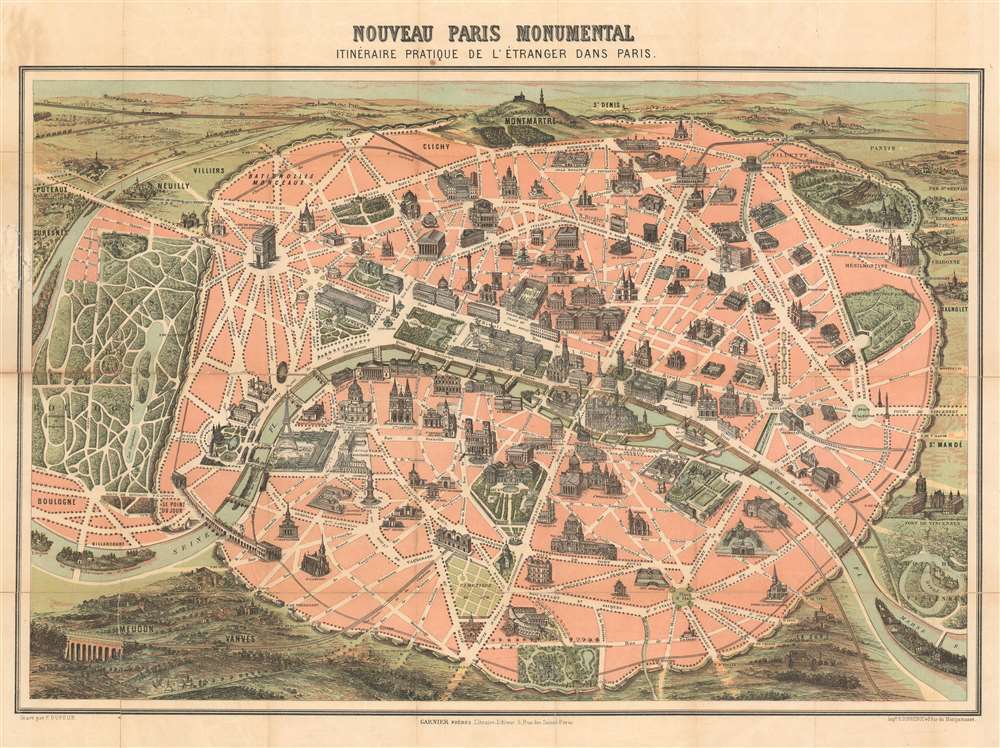 Stunning Art Deco Map of Paris in an early state.

An iconic c. 1889 chromolithographic tourist pocket map of Paris, France. Presented as a same field birds-eye view, this map centers on the Seine River, and covers the embastilled heart of modern Paris. Issued as a tourist piece for the 1889 Exposition Universelle, which introduced the Eiffel Tower, buildings and monuments shown in profile, including the Eiffel Tower, the Arc de Triomphe, Sacre-Coeur, the Pantheon, etc. Paris itself is set as if in a verdant garden surrounded by the Bois de Boulogne, the Bois de Vincennes, and various suburban villages. In the north, under a blue sky, rolling hills stretch indefinitely into Normandy towards the English Channel.

Tom Conley, referencing the map in his brilliant discussion on cartographic influences in cinema describes it beautifully,

And indeed Paris is a tableau of modern punctuated, as with the illustrated monuments, by a long and fascinating history as a center of commerce, education, arts, and culture.

Issued in various forms from about 1867 to 1950, his map has along and interesting publication history that has received little attention from map historians and other scholars – mostly likely because of the profound difficulty in assessing the date of the individual maps, none of which are dated, and the multitude of variants issued by numerous firms. Having dealt with many versions of this map, we believe we may have pieced together a tentative history. This map is based upon an 1867 map engraved by Hilaire Guesnu and published by Auguste Logerot for the Exposition Universelle of that year. That map is distinctive for introducing various iconic elements that would remain with the series well into the 20th century – namely the same-field bird's-eye view perspective, monuments rendered in profile, general coverage, and more, but is printed using a steel plate process. The map appears to have been subsequently adapted by F. Dufour, Eugène Dufrenoy, and Garnier Frères using a more modern chromolithograph process and issued sometime prior to the 1878 Exposition Universelle, and is notable for having a blank Champs de Mars. It was again issued by Dufour and Garnier for the 1878 Exposition Universelle with updates around the Champs de Mars referencing the event. Another Garnier edition was prepared for the 1889 Exposition Universelle, in which the Eiffel Tower is added to the Champs de Mars (present example). Around 1900 various other firms began copying the Garnier / Dufour model, including Leconte, Guilmin, Robelin, Hachette, and others. Also, around this time the map was co-opted to illustrate the Paris Métro system, which was initiated in 1900. Post-1900 variants can be more easily dated by referencing the development of the Métro system. These editions also did away with some of the map's iconic qualities, including the bird-eye view aspect to the surrounding countryside.


F. Dufour (18?? - 18??) was a French engraver active in Paris during the second half of the 19th century. He is best known for engraving an iconic view of Paris and its monuments. Dufour was based, at least for part of his career, at 35 Rue Vavin, Paris. Learn More...

Good. Some edge wear. Minor damage where originally attached to boards. Laid down on archival tissue.