1749 Vaugondy Map of Texas and California 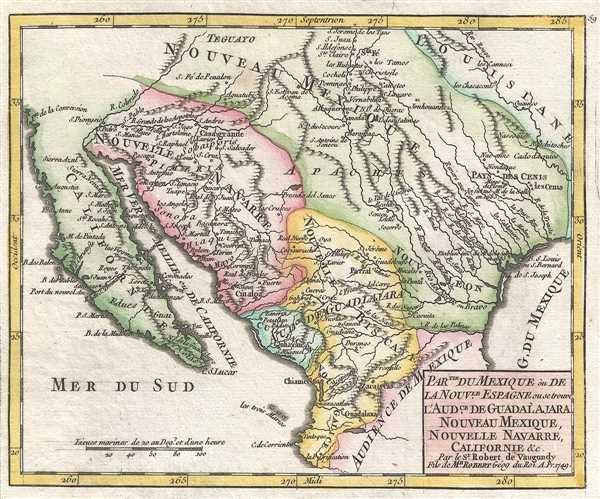 1749 Vaugondy Map of Texas and California

This is a hand colored 1749 Didier Robert de Vaugondy map of Mexico and Texas. Issued on the cusp of the French and Indian War, this map depicts the southwestern United States from Santa Fe south to central Mexico and from California to Oklahoma (Louisiana) and the Red River in French Louisiana. Although still Spanish Territory, the lands that would become Texas, not here labeled as such, are already somewhat segregated, north of the Palmas River, from the territories to the south. The map depicts Spanish territory in Central and North America, labeling a very large portion of the current southwestern United States, including Texas, as New Mexico, with other regions called New Navarre, the Audience of Guadalajara, and the Audience of Mexico. At this point in history, these Spanish territories were bordered by French Louisiana, as depicted on the map. Numerous rivers are depicted, including the Colorado, the Rio Bravo, and the Red River. Myriad cities are depicted as well.

Of some interest, the land of Teguayo is prominently identified at the norther extremis of the map. Teguayo is one of several mythical 'kingdoms of gold' believed to exist in the largely unexplored American Southwest. It was popularized by the nefarious Don Diego Dionisio de Peñalosa. Peñalosa could generously described as a roguish adventurer but is more accurately a traitorous scoundrel in the true conquistador fashion. In a power grab, Peñalosa latched on to legends of Teguayo referenced in the 1630 Benavides Memorial. He elaborated the Franciscan missionary Alonso de Benavides' description of the mythic city turning it into a metropolis to rival the former Aztec capital of Tenochtitlan. When the Spanish refused to fund his plan to conquer the Teguayo, he turned to the French, who were entrenched in nearby Louisiana. While the French did not fund Peñalosa, the inclusion of a prominent Teguayo on this map, as well as notes regarding La Salle's claims well inside Spanish territory, suggest French interest in expanding their claims in America – an ambition that would soon lead to the French and Indian War.