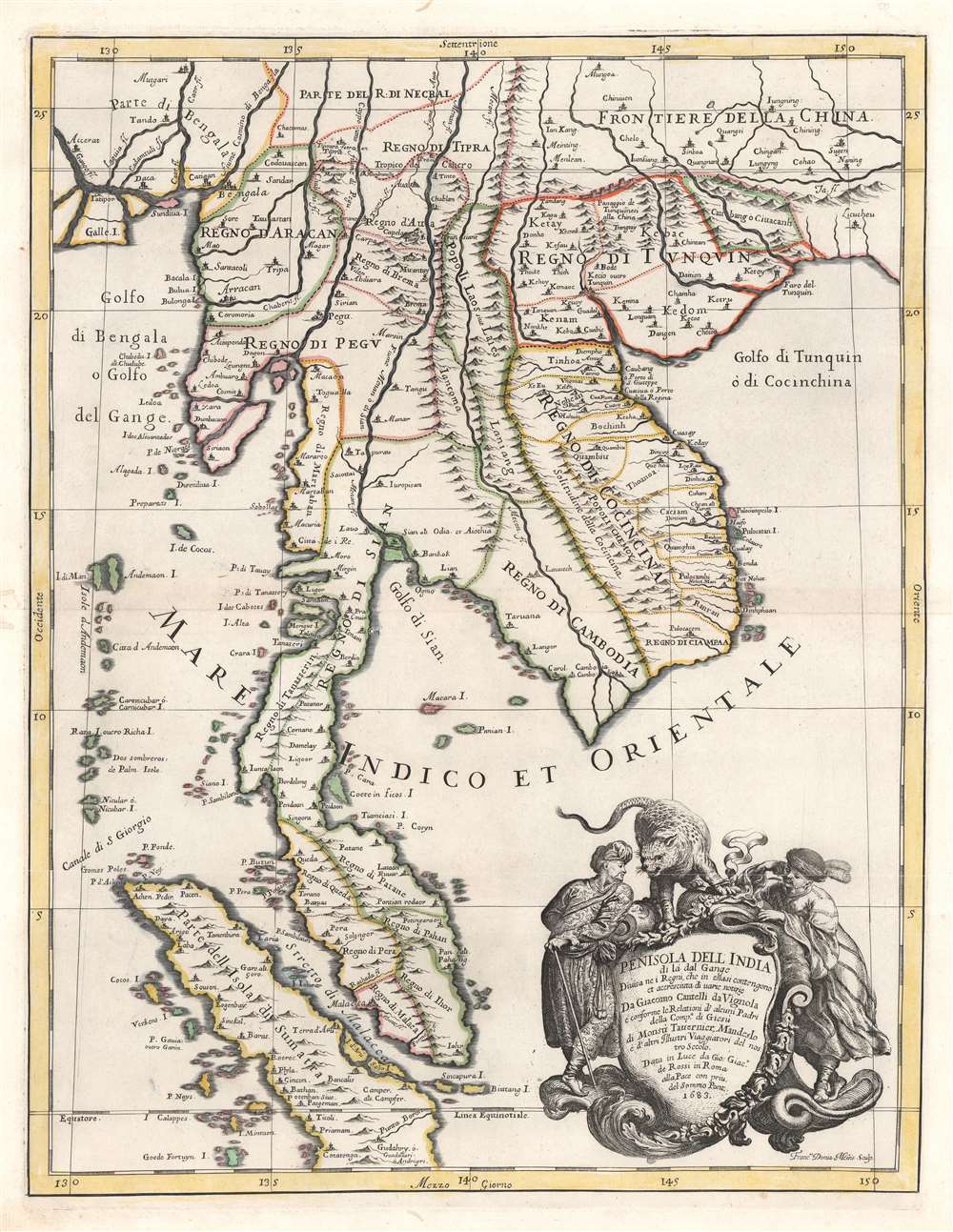 The first European map to identify polities within the Malay Peninsula.
$2,300.00

A rare, highly decorative, and cartographically significant 1683 map of Southeast Asia by Giacomo Cantelli da Vignola and Giacomo de Rossi. This is one of the first maps of Southeast Asia to incorporate new information from Johan Albrecht de Mandelslo (1616-1644) and Jean-Baptiste Tavernier (1605-1689) in the form of independent polities in Malay. Centered on modern day Bangkok, which is noted, this stunning map covers from Southern China and Burma to the Island of Singapore, and from the Andaman Islands to the Gulf of Tonkin. It includes most of modern day Thailand, all of Malaysia, Laos, Cambodia, Vietnam, and Singapore, and parts of Burma, China, and Sumatra. Bangkok is noted, although at this point in time it had not yet risen to prominence. Conversely so too is is the city of Aracan, which, when this map was issued, was at its height of nearly 160,000 people. Today it is better known as the remote and but crumbling ruin of Mrauk U. There is a large and dramatic cartouche in the lower right hand quadrant that features two Southeast Asian potentates in postures of aristocratic savoir-faire. The shield itself is surmounted by an impressive snarling leopard.

Cartographically this map is based upon earlier Dutch maps updated and revised with new information from the travels of Jesuit priests, the German adventurer Johan Albrecht de Mandelslo, and the French merchant Jean-Baptiste Tavernier – it is these last two individuals to whom the map is dedicated. Much of this new information can be seen in the form this maps first European cartographic depiction of political divisions in the Malay peninsula. The conventions established here by Cantelli da Vignola were subsequently followed Coronelli and others. The next map to update these conventions with practical information was François Valentijn's Neue Karte von der Insel Sumatra issued nearly 40 years later in 1725.

This map was prepared by Giacomo Cantelli da Vignola, engraved by Francus Donia Messis, and published by Giacomo de Rossi in his c. 1683 Mercurio Geografico