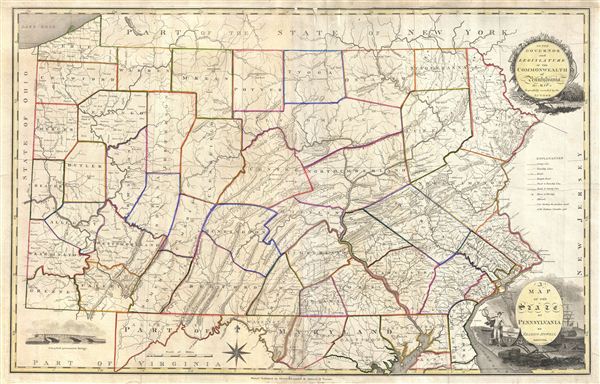 A cartographic landmark in the mapping of Pennsylvania.

This map, which was first issued by Reading Howell in 1791, is considered to be one of the most important maps of Pennsylvania ever issued as well as the finest of the 18th century. Howell, a landowner and surveyor of Pennsylvania, was commissioned by the Pennsylvania Assembly in 1789 to create a map of the state compiling all of the new information generated by military surveyors on both sides of the conflict during the American Revolutionary War. Howell used this data, as well as his own survey work near the headwaters of the Susquehanna, Lehigh, and Schuylkill Rivers to produce this highly influential map.

Howell's contract with the Pennsylvania Assembly, for which he was advanced 200 pounds, demanded that he produce the new map in 2 years. The earliest known examples of Howell's map date to 1792, however, there are state records suggesting that a copyright was issued and possibly a delivery was made in 1791. It was later republished in several subsequent editions, the most famous being two important 1811 issues, the current example being one. Both 1811 editions were engraved by John Vallance. This edition of the map corresponds to the third state, published by Kimber & Conrad and Johnson & Warner, in which the original has been reduced and updated with decorative cartouche and vignette work added to the corners. These decorative cartouche elements appear in no other issue of Reading Howell's map. Later reissues were published in 1816 and 1817. Howell's map remained the finest cartographic representation of Pennsylvania for roughly 20 years until, in 1822, it was superseded by John Melish's Map of Pennsylvania.

Reading Howell (1743 - 1827) was a Pennsylvania based engineer, landowner, and surveyor active in the late 18th and early 19th century. While little is known of his personal life, records do survive of his surveying projects, including detailed surveys of the Delaware, Lehigh, and Schuylkill Rivers. In 1789 he was commissioned by the assembly of Pennsylvania to, for the sum of two hundred pounds, to produce a detailed map of the state. This map, which was initially published in 1792, was the first map of Pennsylvania to be issued following the American Revolutionary War. This important document would prove to be the finest and most important map of Pennsylvania to be issued to date, incorporating, as it did, the wealth of cartographic information generated by both American and British military surveyors during the Revolution. From 1804 to his death in 1827, Howell held the title of "Principal City Surveyor" as well as "City Regulator" of Philadelphia, where his name is attached to numerous surveys related to land disputes. Learn More...