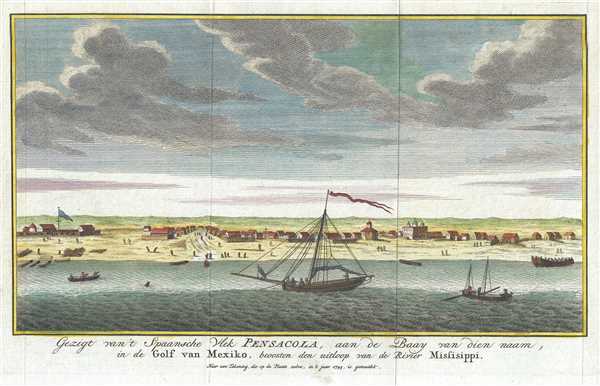 This is a 1743 Isaak Tirion view of Pensacola, Florida. This incredibly attractive view most likely depicts the settlement from Pensacola Bay. Numerous churches, houses, and other buildings are illustrated, along with a sailing ship and several smaller boats. It appears that logs have been buried in the beach near the main street in order to tie up the smaller boats close to shore.

Pensacola was founded by the Spanish in 1559, and over the course of the almost 150 years between its founding and when this view was engraved, the settlement had been occupied and abandoned by the French and then reestablished by the Spanish. When the Spanish reestablished Pensacola, after the French left in 1722 because the settlement was destroyed by a hurricane, they moved the settlement from the storm-vulnerable barrier island to the mainland. This is why we believe that the view is looking from Pensacola Bay. Thus, this view was engraved during the Second Spanish Period in Pensacola's history.

This view was created by Isaak Tirion in 1743.