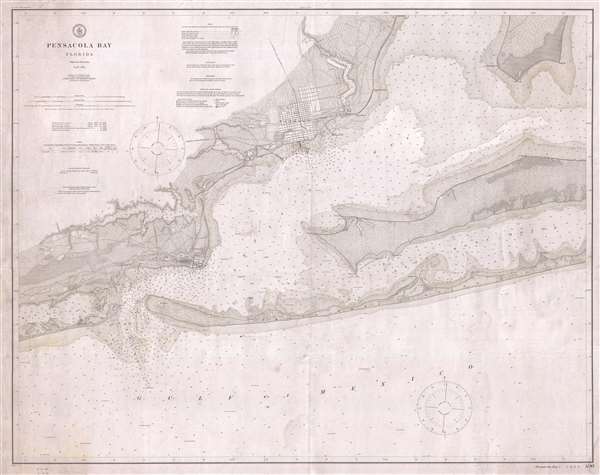 This is a 1913 U.S. Coast and Geodetic Survey nautical chart or maritime map of Pensacola Bay, Florida. The map depicts the region from Big Lagoon and the Gulf of Mexico to the East Bay and from north of Pensacola to the Gulf of Mexico. Highly detailed, myriad depth soundings are present, given in both fathoms and feet, depending of the location, with the highest concentration in the strait between Santa Rosa Island and Warrington. Pensacola itself is illustrated in detail, complete with the street grid and the post office and several wharves labeled. Points and bluffs are labeled all along the coast, including Hernandez Point, Garcon Point, and White Point. Bayou Grande is also illustrated and labeled and contains over two dozen depth soundings. Information concerning tides, soundings, lights, and signs and abbreviations used on the map is all situated in the upper right corner.

This map was created by the United States Coast and Geodetic Survey and published in 1913.