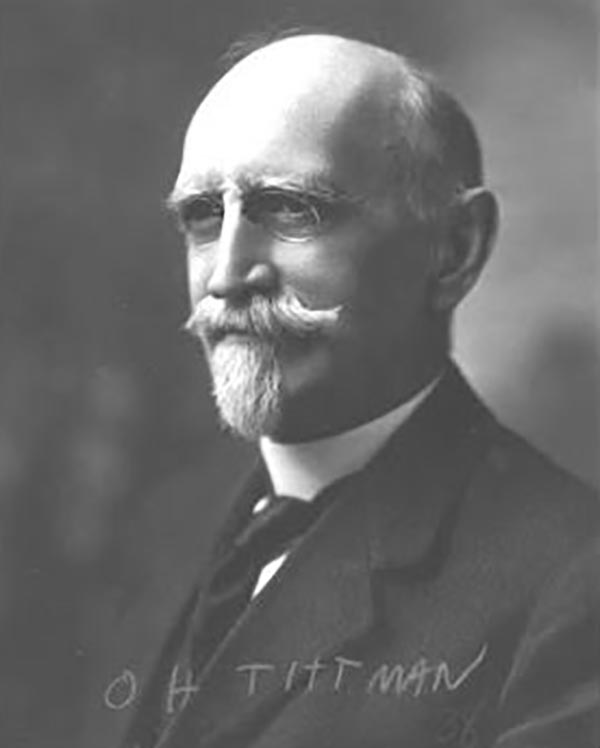 Otto Hilgard Tittmann (August 20, 1850 - August 21, 1938) was a German-American geodesist, geographer, and astronomer. Born in Belleville, Illinois, Tittmann attended school in St. Louis before joining the U.S. Coast and Geodetic Survey on November 10, 1867, and would remain with the U.S.C.G.S until his resignation 48 years later. Between 1889 and 1893, Dr. Tittmann was in charge of the Office of Standard Weights and Measures, which was, at this time in American history, part of the Coast and Geodetic Survey, and would remain so until the establishment of the National Bureau of Standards. During his time in charge of Weights and Measures, Tittman was sent to Paris to bring to the United States the national standard meter and to study weights and measures offices in Paris, London, and Berlin. Tittmann was named Assistant Superintendent of the Coast and Geodetic Survey on April 18, 1899 and was elevated to the post of Superintendent on December 1 1900, which he held until he resigned the post on April 15, 1915. Tittman, a co-founder of the National Geographic Society, served as the Society's President from 1915 until 1919. He was also a member of the Philosophical Society of Washington, the American Philosophical Society, the Washington Academy of Sciences, the American Association for the Advancement of Scient, the American Meteorological Society, the American Society of Civil Engineers, and the Cosmos Club. Dr. Tittman was a respected geodesist and renowned as one of the best in the country.

1902 U.S.C.G.S. Nautical Chart of the Entrance to Delaware Bay