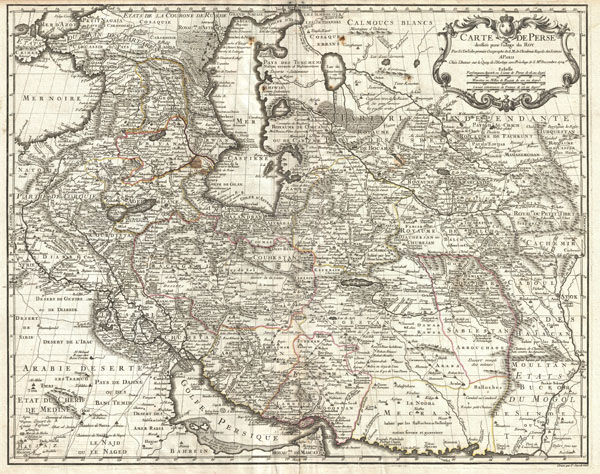 The most detailed map of Persia of its time.

A fine first edition example of Guillaume De L'Isle's important 1724 map of Persia. Covers from the Crimea and the Sea of Azov south to the Persian Gulf and the Straight of Ormuz and east as far as Kashmir (Cachmir) and Kabul (Caboul). This map includes modern day Iran, Iraq, Afghanistan, Kuwait, Uzbekistan, Turkmenistan, Tajikistan, Georgia, Armenia, and Azerbaijan, with adjacent parts of Russia, Pakistan, Turkey, Ukraine, and Kazakhstan, and Arabia.

Cartographically De L'Isle's mapping of Persia marks a significant advance in European cartographic knowledge of the region. This map benefits considerably from Russian cartographic surveys and other sources no doubt smuggled to Guillaume De L'Isle by his brother Nicholas de L'Isle, who held a cartographic position with the Russian Academy of Sciences. The extent to which Russian data influenced this map is nowhere more evident than in De L'Isle's remarkable rendering of the Caspian Sea – one of the first accurate maps of the great lake to follow Van Verden's historic survey of 1721. Russian cartographic information is also apparent with regard to place names, such as the Russian name for the Aral Sea (Glouchoiye). It is equally likely that De L'Isle drew on Russian sources for his mapping of the Silk Route centers of Bukhara, Samarkand, and Ferghana, which were known stopping points for Russian trade envoys to China.

For the remainder of Persia De L'Isle most likely updated Persian and Arabic cartographic information with reports from Georgian and Armenian traders and mercenaries active throughout Persia. It may be through these sources that De L'Isle was able to add considerable geographic information regarding trade routes and place names in central Persia. These include such significant advances as the identification of Terheran (Tiheran), the current capital of Iran, which is notable absent it earlier European maps of Persia.

This map was drawn by Guillaume De L'Isle and engraved by P. Starckman. It issued independently as well as included in a number of composite atlases including De L'Isle's 1731 Atlas de Geographie. A number of reissues by Buache, Covens & Mortier, and others followed.