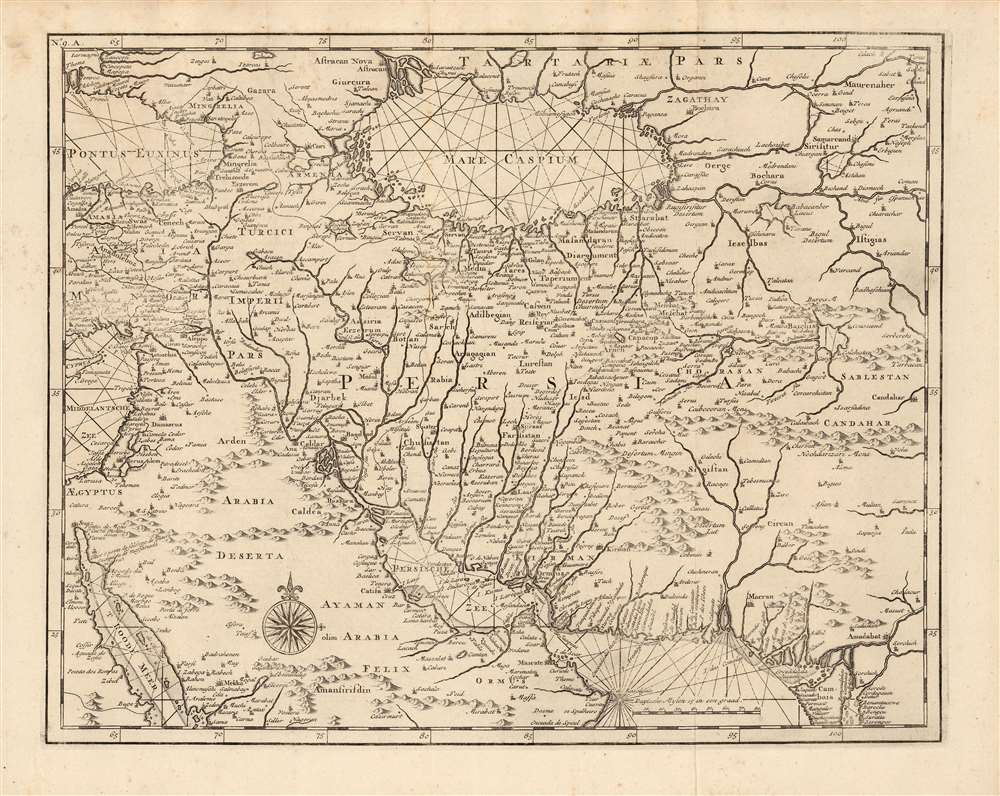 This is a rare 1726 map of Persia by Francois Valentijn. It covers from the Gulf of Suez eastward to Ahmedabad (Amadabad) in modern-day western India. This map, centered on Persia, includes the Caspian Sea and part of the Arabian Peninsula. The map is highly detailed, noting numerous rivers, towns, islands and mountains. Stippling along the coastlines indicates shallows. The detail of this elegant and scarce map, alas, reflects the cartography of the previous centuries: place names are largely consistent with those found on the 16th century maps of Giacomo Gastaldi, which were largely passed along wholesale to Blaeu, whose labors this map's maker appears to have mined.

The map's cartography draws heavily on Blaeu's 1634 maps of Persia and of the Turkish Empire, and as such depicts the Caspian in a bulbous horizontal form - this delineation was shared by virtually every cartographer of the sixteenth and seventeenth centuries, and can be traced back through Gastaldi to the second century cartography of Alexandrian geographer Claudius Ptolemy. Olearius's 1656 map would be the first map to begin correcting this error, and it would not be until Carl van Verden's mapping of 1720-21 that the lake would be accurately mapped. Although van Verden's work had been published by De l'Isle by the time Valentijn's 1726 Oud en Nieuw Oost-Indien was published, this map did not benefit from the new cartography. Valentijn's work, which described the history of the Dutch East India Company and the countries of the Far East, drew on much of the author's own sixteen years' experience in the East Indies, particularly in Ambon. He benefited as well from access to the V.O.C.'s (Dutch East India Company's) archive of maps and geographic trade secrets. Valentijn's maps of the far east were indeed some of the most accurate published of those regions to date, but he himself never traveled to Persia, and this region also fell well outside the V.O.C.'s sphere. It may be that neither van Verden nor De l'Isle's new cartography had not reached Valentijn; it also may well be that he considered Persia peripheral to the subject of the work at hand, and thus did not strain to find a more state-of-the-art delineation of the region.

This map was engraved for inclusion in Valentijn's eight-volumeOud en Nieuw Oost-Indien, which was published in 1726. Though this map has no engravers' imprint, several of the other maps in Valentijn's work were engraved by Frederick Ottens, (1694-1727) a son and student of Joachim Ottens. We see approximately thirty examples of the complete work in institutional collections; the separate map is not catalogued in OCLC.


Joachim Ottens (1663 - 1719) and his sons Renier (? - 1750) and Joshua (? - 1765) Ottens were prominent Dutch booksellers and map publishers from about 1680 to 1790. Joachim, the founder of the firm, was initially employed as a copperplate engraver by Frederick de Wit. In 1711 Joachim founded his own firm. Though Joachim died only a few years later, his sons Renier and Joshua took over the firm and presided over its most prolific period. The Ottens family's most notable contribution to cartography were its enormous made-to-order multi-volume atlases such as the Atlas Major. Some examples of the Atlas are compiled from over 800 separately issued maps. Learn More...