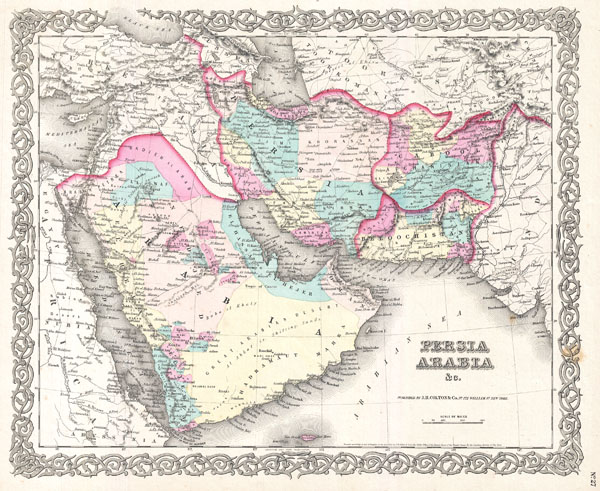 A beautiful 1855 first edition example of Colton's map of Persia, Arabia and Afghanistan. Covers from the Mediterranean east to India and south to include all of Arabia to the entrance to the Red Sea. Includes adjacent parts of Egypt, Abyssinia, Turkey, India and Turkistan. In this early edition of the map Afghanistan is divided into 'Afghanistan' and Beloochistan.' Later editions unite the provinces and drop 'Cabool' as an alternate name for Afghanistan. Throughout the map, Colton identifies various cities, towns, forts, rivers, desert oases, and an assortment of additional topographical details. Surrounded by Colton's typical spiral motif border. Dated and copyrighted to J. H. Colton, 1855. Published from Colton's 172 William Street Office in New York City. Issued as page no. 27 in volume 2 of the first edition of George Washington Colton's 1855 Atlas of the World.