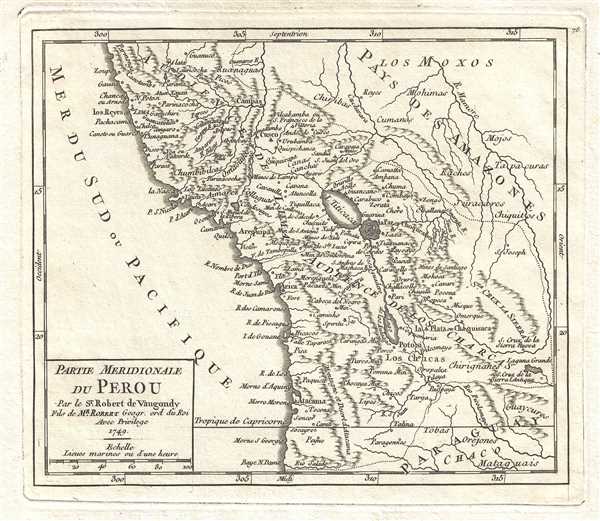 This is a 1749 Didier Robert de Vaugondy map of southern Peru (Perou) and Bolivia, including Potosí. Potosí is famous because it is dominated by the Cerro de Potosí, also known as the 'Cerro Rico' (Rich Mountain / Hill). The Cerro de Potosí was believed to be literally 'made of' silver. This silver provided vast amounts of wealth for the New World Spanish Empire and was sent either north to Panama City and then across the isthmus, or east to Buenos Aires via the Rio de la Plata.

The map depicts from the Pacific Ocean to Bolivia, 'Amazon country (Pays des Amazones)' and from just north of Lima to Paraguay. Highly detailed, the map presents a meticulous view of the region. Myriad cities are labeled, including Lima, along the Pacific coast near the top of the map, Cusco, La Paz, and Potosí. Several rivers are depicted as well as Lake Titicaca, which lies virtually at center. Mountains cover the map and are presented in profile.