1861 U. S. Coast Survey Map or Chart of the Napa Valley California 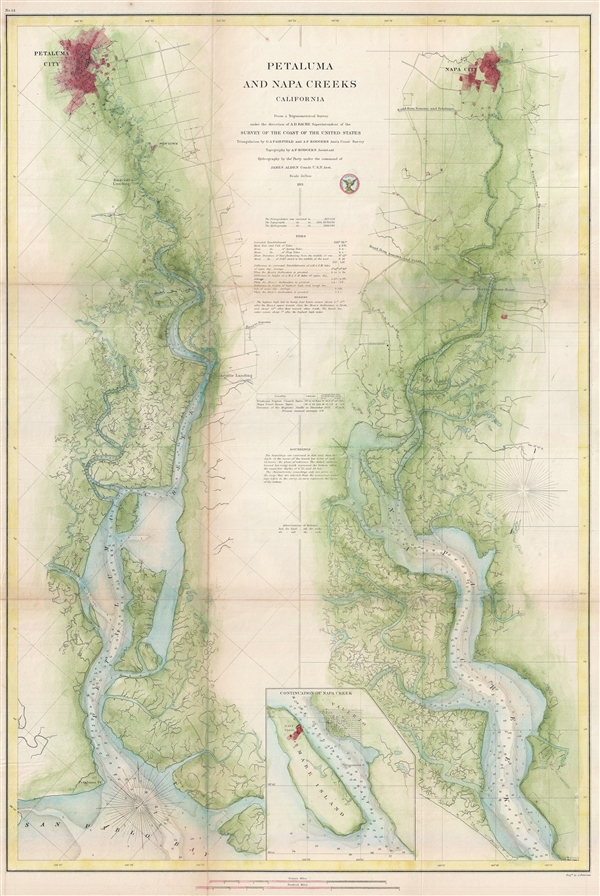 1861 U. S. Coast Survey Map or Chart of the Napa Valley California

This is an uncommon 1861 U.S. Coast Survey nautical chart or map of the Napa River Valley and Petaluma River Valley, California. Essentially two maps on the same sheet, the left hand side of the sheet features a chart of the Petaluma Creek from Petaluma City as it empties into the San Pablo Bay. The chart on the right features the Napa Creek from Napa City to the Bay. Today this region enjoys international regard as the production center of some of the world's finest wines.

The southern part of the Napa Creek as it empties into the San Pablo Bay between Mare Island and Vallejo is included in an inset near the bottom border and feature the Mare Island Straits. The straits, which are the mouth of the Napa River, are today popular for recreational boating and water sports.

The triangulation for this chart was accomplished by G. A. Fairfield and A. F. Rodgers. The topography is the work of A. F. Rodgers and the hydrography was completed by a party under the command of James Alden. The entire work was produced in 1861 under the direction of A. D. Bache, Superintendent of the Survey of the Coast of the United States and one of the most influential American cartographers of the 19th century. Issued in the 1861 edition of the Superintendent’s Report.

Very good. Backed on archival tissue. Some wear and toning on original fold lines.
Looking for a high-resolution scan of this?