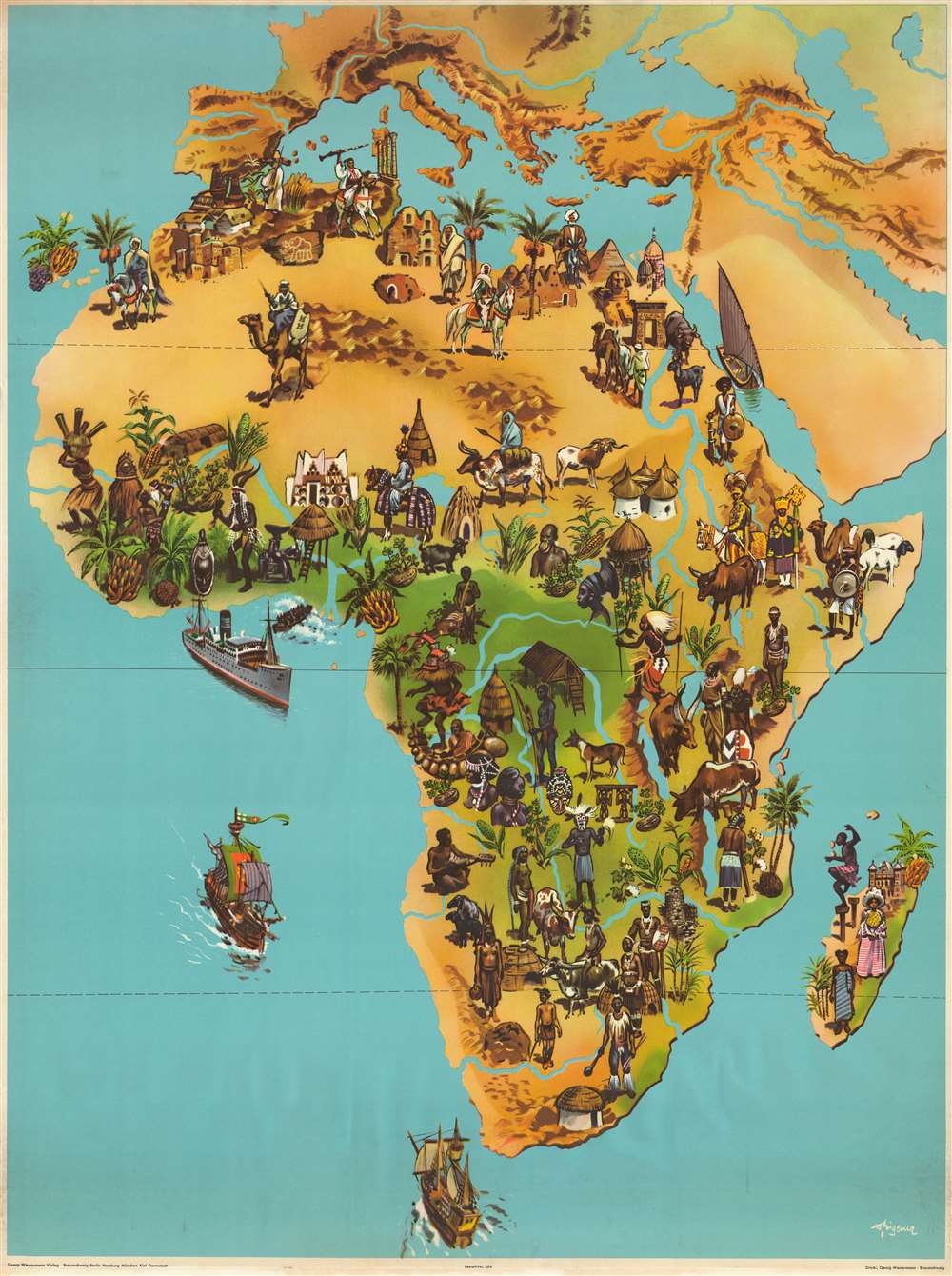 This is a c. 1957 Georg Westermann Verlag pictorial wall map of Africa. The map depicts the entire continent, stretching from central Europe to the Cape of Good Hope and from the Atlantic Ocean to the Indian Ocean and the Persian Gulf. Stunningly illustrated, the artist's portrayal of the 'Dark Continent' takes a decidedly ethnographic direction. While Africa is known the world over for its wildlife, here the artist focuses on the people living throughout the continent. Africa's citizens, from the Barbary Coast to the Cape, are shown in traditional dress. North Africans, in their flowing clothing, are drawn riding horses and camels through the desert or standing alongside their dwellings. The Great Pyramid at Giza and the Sphinx are also included in Egypt, although no national borders appear. Sub-Saharan Africa, shaded green to emphasize the contrast with the arid Sahara Desert, is populated by its many different peoples wearing headdresses and masks while participating in ceremonies, or preparing to go on a hunt. Other illustrations feature traditional jewelry or tribe members tending to cattle.

This map was published c. 1957 by Georg Westermann.

Georg (George) Westermann (February 23, 1810 - September 7, 1879) was a German publisher and the founder of Westermann Verlag, based in Braunschweig, which still exists to this day and publishes as part of the Westermann Group. Born in Leipzig, Westermann attended the Humanistic Gymnasium Albertina in Freiberg before moving to Brunswick to work as an apprentice to a book publisher and seller in 1827. He founded his own publishing bookstore in Braunschweig in 1838 and married Blanca Vieweg on November 29th of that year. Westermann expanded his operation in 1845 by acquiring his own printing works, which he later supplemented with a lithographic machine, steam-powered letterpresses, and a bookbindery. After Westermann died in 1879, his son Friedrich took over the business.

Very good. Even overall toning. Mounted on thin linen. Wear along edges. Blank on verso.
Looking for a high-resolution scan of this?