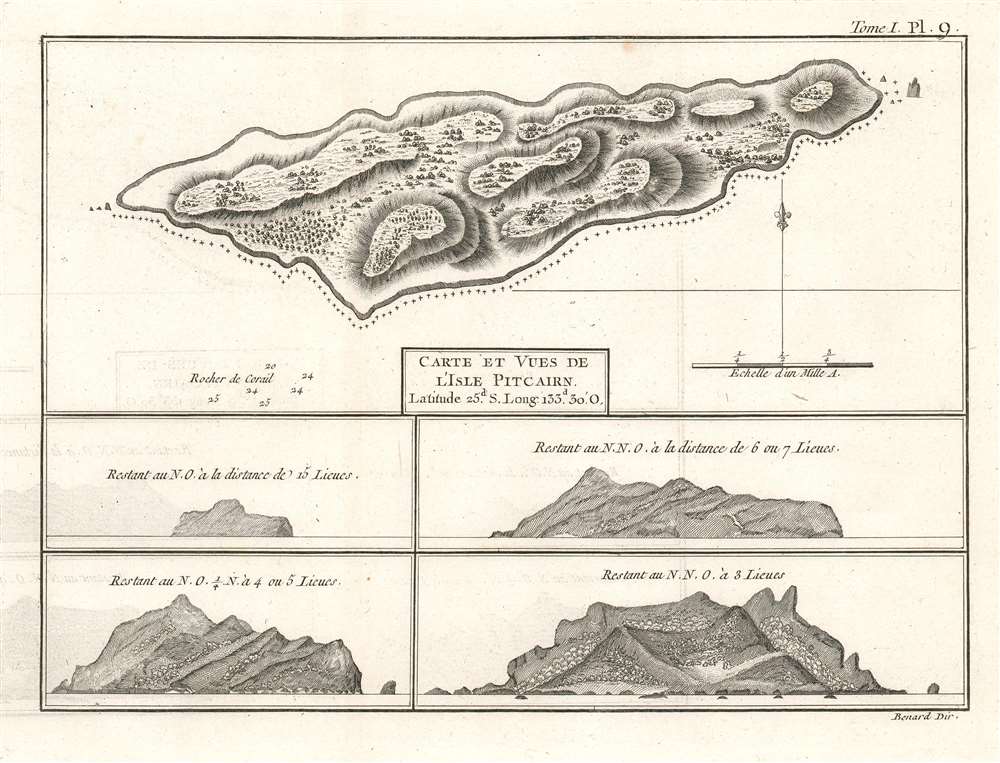 A Chart of Pitcairn Island as Carteret Found It

This is a 1774 map of Pitcairn Island, encountered first by Europeans on Captain Carteret's circumnavigation of 1767. HMS Swallow having been separated from the other ship of the expedition and gripped with scurvy, the opportunity for resupply would have been tantalizing. It was not, however, to be:

We continued our course westward till the evening of Thursday the 2d of July when we discovered land to the northward of us. Upon approaching it the next day, it appeared like a great rock rising out of the sea: it was not more than five miles in circumference, and seemed to be uninhabited; it was, however, covered with trees, and we saw a small stream of fresh water running down one side of it. I would have landed upon it, but the surf, which at this season broke upon it with great violence, rendered it impossible.

The island was first spotted by fifteen-year-old midshipman Robert Pitcairn, and so named after him. (The unfortunate middie would die at sea three years later.) As Carteret was unable to survey the island by foot, the interior topography must be construed as speculative, based on the analysis of the views of the island taken from sea. The breakers along the souther shore of the island and the rough coastline that so discouraged the explorer are discernible in the views.

In 1789, Fletcher Christian and the mutineers of HMS Bounty remembered the reports of this remote and notionally uninhabited island when they sought refuge from the British Admiralty. Archaeological evidence shows that the earliest settlers of Pitcairn were Polynesians, probably native to Henderson and Mangareva Islands, who may have maintained a trading relationship between all three islands exchanging food for high quality rock and obsidian available on Pitcairn but not on the other islands. The deforestation of Mangareva is thought to have led to the decline of this culture, as Pitcairn especially was unable to sustain a large, isolated population.

This map was engraved by Robert Bénard for the 1774 French edition of James Hawkesworth's Relation des voyages entrepris par ordre de Sa Majeste Britannique actuellement regnante, an account of Cook's voyages. The separate engraving appears to be neglected by institutional collections, appearing only in the National Library of Australia, the National Library of New Zealand, and Princeton. The full text, however, is well represented in institutional collections.


Philip Carteret, Seigneur of Trinity (January 22, 1733 - July 21 1796) was a British naval officer and explorer who participated in two of the Royal Navy's circumnavigation expeditions in 1764–66 and 1766–69. He served as a lieutenant aboard HMS Dolphin under Byron during his voyage of circumnavigation from June 1764 to May 1766. Later that year he was made commander and given the command of HMS Swallow to circumnavigate the world, as supporting HMS Dolphin under the command of Samuel Wallis. The two ships were separated after passing through the Strait of Magellan, but Carteret continued his circumnavigation aboard Swallow. During the voyage he discovered both Pitcairn Island and the Carteret Islands, which were subsequently named after him. In 1767, he discovered a new archipelago inside Saint George's Channel between New Ireland and New Britain Islands, and rediscovered the Solomon Islands first sighted by the Spaniard Álvaro de Mendaña in 1568, and the Juan Fernández Islands first discovered by Juan Fernández in 1574. Learn More...

Very good condition. Some very faint offsetting, else an excellent example.
Looking for a high-resolution scan of this?