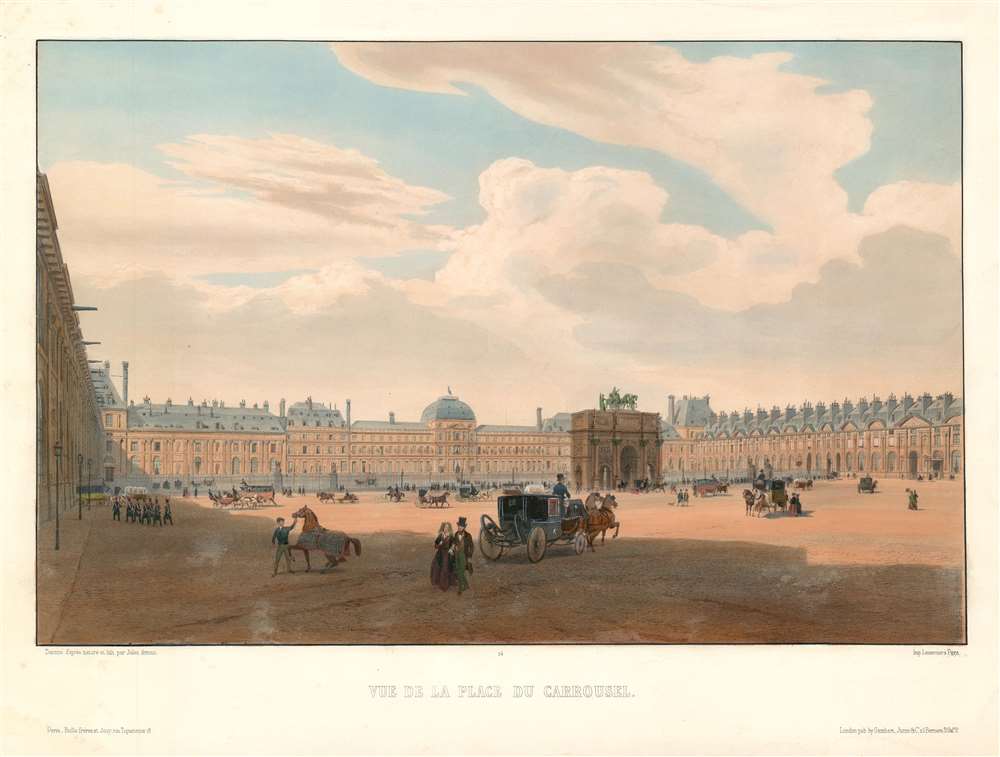 A view of the Palais des Tuileries, a royal and imperial residence in Paris that was destroyed by the Paris Commune in 1871.
$500.00

This is a c. 1845 Jules Arnout view of the Place du Carrousel and the Palais des Tuileries (Tuileries Palace) in Paris, France. The view illustrates the Place du Carrousel from the east and depicts a typical day in Paris. Parisians rush across the square, on foot, on horseback, and in carriages. All this activity takes place in the shadow of the Arc de Triomphe du Carrousel, constructed to commemorate Napoleon's military victories between 1806 and 1808. Based on the Arch of Constantine in Rome, the Arc de Triomphe du Carrousel is topped by the Horses of Saint Mark from Saint Mark's Cathedral in Venice, which were brought to Paris by Napoleon in 1798 after he captured Venice. Behind the Arc de Triomphe du Carrousel stands the Palais de Tuileries. This palace was the main royal residence for French monarchs from Henry IV through Napoleon III until it was burned down by the Paris Commune in 1871. The Palais des Tuileries was never rebuilt, although a campaign advocating for its reconstruction has been ongoing since 2003.

This view was created by Jules Arnout and printed by the Lemercier firm. It was published c. 1845 in Paris by Bulla frères and in London by Gambart, Junin, and Company. This is the only known example.

Very good. Even overall toning. Light foxing and soiling. Blank on verso.
Looking for a high-resolution scan of this?