1854 Pharoah Map or Plan of the City of Eluru in Andhra Pradesh, India 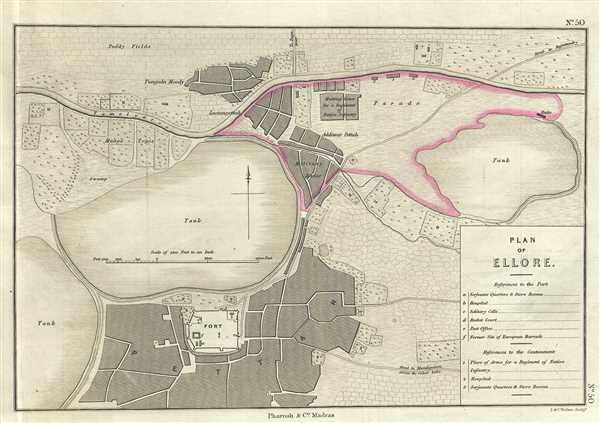 1854 Pharoah Map or Plan of the City of Eluru in Andhra Pradesh, India

Lovely depiction of the town of Eluru, India under British control.
$200.00

This is a nice example of the 1854 Pharoah and Company map of the town of Eluru in the Indian State of Andhra Pradesh. It covers the town at the time it was a military station and part of the Madras Presidency under British control. The map notes the three tanks, swamps, fields, cantonment, etc. The fort is identified, was built using stones from the temples of the ancient Buddhist capital of Vengi. A reference below the title lists the locations marked on the fort and the cantonment. Today Eluru has expanded into a city and is part of the West Godavari district of Andhra Pradesh.

This map was engraved by J. and C. Walker and issued as plate no. 50 by Pharoah and Company in their 1854 Atlas of Southern India.