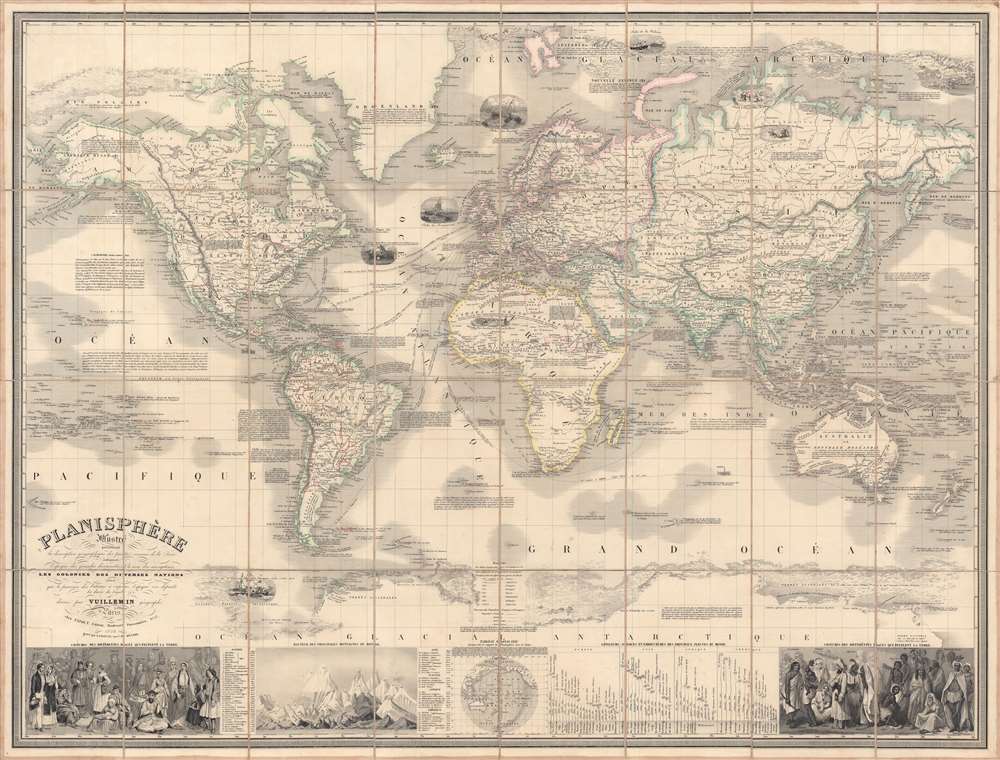 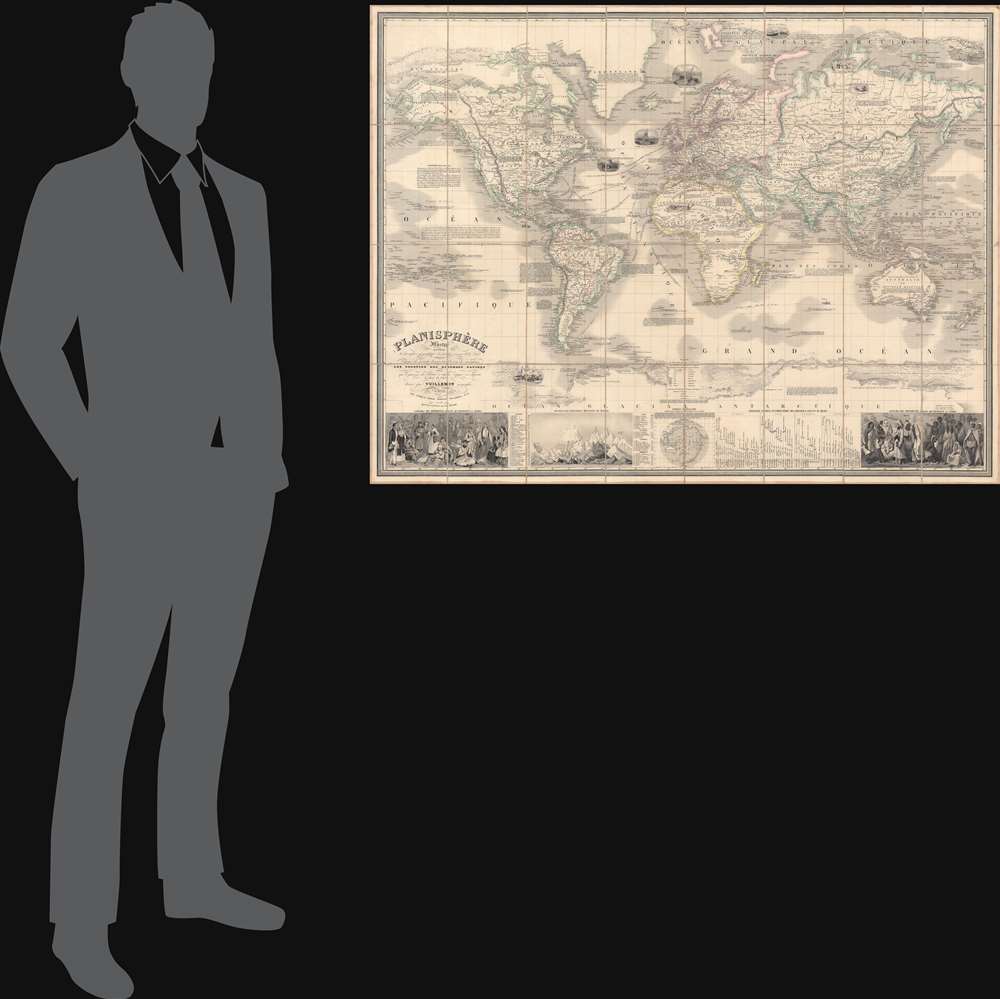 This is a scarce and beautifully engraved 1853 'planisphere' world map by Alexandre Vuillemin and Langevin. It illustrates known global geography along with vignettes and explanatory notes on the history of navigation, natural resources, and the cultures of various parts of the world.

This map reflects the state of geographical knowledge in the mid-19th century, with most of the world's lands and oceans charted. At the time, polar exploration was emerging as the great arena for future discoveries and the enthusiasm for such is here evident. Extensive notes on the peoples and geography of areas within or approaching the Arctic appear, including mention of the discovery of a mammoth carcass in Siberian permafrost and recognition of the survival methods of indigenous peoples. The term 'Terra Australes' is used for Antarctica, which only became the standard name at the end of the 19th century.

The borders between countries and other annotations, especially the underlining of placenames, was done by hand. The bottom portion is filled with a series of illustrations and diagrams. These include two charts illustrating the dress of various peoples around the world, a chart comparing the heights of the world's mountains, a chart comparing the lengths of the world's rivers, and a mall map of the Pacific Ocean.

Notes and illustrations throughout discuss the history of navigation and discovery as well as the cultures, climates, and products of various parts of the globe. For example, a comment discusses the California Gold Rush, and the area around Sacramento referred to as El Dorado. There is considerable attention paid to zoology, especially fish, whales, and animals providing pelts, reflecting their economic importance. The dates of discovery of various lands include the name of the French king at the time, all the way back to Lothaire in the 10th century. Colonial powers are identified by capital letters, with English possessions underlined in red and French possessions in blue.

France and the World in the mid-19th Century

This map was published in the early years of the Second French Empire, led by Napoléon III (Louis-Napoléon), a nephew of Napoleon Bonaparte. France's foreign policy in this period can roughly be described as rectifying injured pride. Having nearly conquered all of Europe only forty years before, France was at risk of becoming a second-rate power, far behind Britain in the realm of global imperial reach. Louis-Napoléon aimed to repeat the glorious victories of his uncle, launching military interventions in Europe and abroad. He also tried to more closely integrate Algeria, which France had conquered in 1830, and was a firm believer in the 'civilizing mission' of French colonialism.

In reality, France had little hope of challenging British industrial or commercial predominance, mostly exporting luxury goods and actually running a trade deficit in some years with much poorer countries, while the appetite for foreign colonization on a large scale was very limited, especially outside of Algeria. Therefore, French imperialism was 'outsourced' to cultural enterprises, especially Catholic missions, and ambitious military officers, who often acted in a private capacity or without prior approval from Paris. Perhaps, then, the careful noting of every discovery by French explorers, the dating of each discovery to the French king ruling at the time, and the underlining every French colony is a manifestation of insecurity about French prestige and power.

This map was drawn by Alexandre Vuillemin, engraved by Langevin, and published by Charles Fatout in 1853. As there are several editions of this planisphere and cataloging practices are not always consistent, its precise distribution is difficult to know. This edition is known to be held only by one institution, the Vrije Universiteit Amsterdam Library, and is very scarce to the market.


Charles Fatout (18?? - 1882) was a French engraver, bookseller, second-hand bookseller, map seller, print seller, bookbinder, and stationer active in Paris during the second half of the 19th century. From about 1840 he was based at Boulevard Poissonnière 17, an office he may have shared with other engravers and publishers of the period. In addition to his private work, he was also employed as a senior clerk under Damascène Morgand (1840 - 1898) in the second-hand book department of the Auguste Fontaine firm, Passage de Panoramas. In 1875, Morgand separated from Fontaine, and taking Fatout along, took over the bookshop of M. E. Caen, founding, 'Librairie Morgand et Fatout' at 55 Passage des Panoramas. Fatout is described in period literature as 'cold and calculating' leading to the success of his firm. Following Fatout's death in 1882, 'Morgand et Fatout' was formally dissolved, but the firm continued under 'Morgand' until 1897. At this time, himself ready to retire, Morgand sold the business at auction to Abbé Bossout, H. Destailleur, and Émile Müller. Learn More...