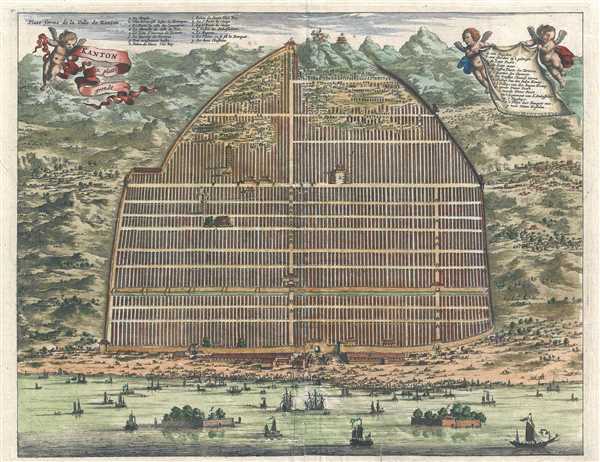 A delightful mix between a view and a city plan - what a great map!

This is a hand colored c. 1670 Pieter van der Aa map or plan of Guangzhou, formerly romanized as Canton, China. Depicted as a hybrid between a view and a plan, the Zhujiang River traverses the bottom of the map, and the amount of traffic and presumed commerce denotes Guangzhou's importance as a trading hub. People and boats are illustrated all along the riverbank, many in large groups. Behind the people, buildings are included, and then the city walls. The city walls are depicted in profile and encircle the city, which is depicted in a grid. Some of the buildings, the ones with the most importance, are depicted in detail and in profile. Beautiful scenery surrounds the city: tree covered hills and small villages in the valleys. Fifteen locations are identified by name and are labeled with letters. A table in French appears on the upper left, near the border, and one in Dutch appears on the right, being held aloft by two cherubs. A cherub holding a ribbon functions as the title cartouche in the upper-left corner.

Created during the final stages of the Qing conquest of the Ming, this view comes from a time of transition. The Qing were the last imperial dynasty in China, and was the second conquest dynasty to rule all of China. By 1670, the violence and civil war had only recently ended in southern China. The last of the people resisting the conquest of the Manchu's had moved south away from their advance, and Guangzhou is in southern China. Although fighting would continue until 1683, when Taiwan fell and became a part of the Qing Empire.

Very good. Wear along original centerfold. Verso repairs to fold separations. Old repaired tear exptending one and a half inches into the printed area from the bottom margin.
Looking for a high-resolution scan of this?