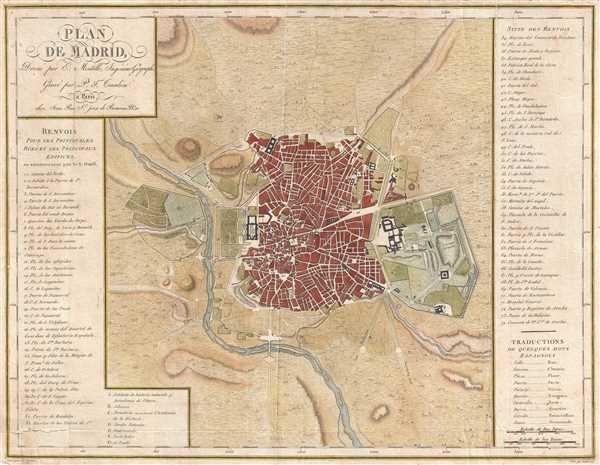 This is a 1782 Edme Mentelle map or plan of Madrid, Spain. This map depicts the city of Madrid from the Manzanares River in the west to the Campo Grande in the east and from the Puerta de Embaxadores in the south to the Puerta des los Pozos in the north as well as a significant amount of countryside surrounding the city. The map is highly detailed but very clean. Instead of labeling streets and buildings on the map itself, a list of 74 of the 'principle streets and buildings' in Madrid. The Plaza Grand de Palacio Real is labeled on the map as well as the Campo Grande. In the countryside around the city, trees are depicted in profile and several hills are included to show the topography of the region.

This map was prepared by Edme Mentelle, drawn by Dubuisson, and engraved by Pierre-François Tardieu. The map was published in Paris by chez Jean as a part of Edme Mentelle's Atlas nouveau.

Edme Mentelle (October 11, 1730 - April 28, 1816) was a French geographer and historian active in Paris during the late 18th century. Mentelle was born in Paris in 1730. He studied under the historian Jean-Baptiste Louis Crevier at the College of Beauvais before accepting a position as professor of Geology and History at the Ecole Militaire where, incidentally, he tutoring the young Napoleon Bonaparte. He remained in this position until the institution was abolished in 1792. Mentelle later worked as a private tutor and then as a professor of Geography at the Ecole Normale. From 1795 he was a member of the Institut National des Sciences et des Arts, which he helped to found. Mentelle published a number of importantly geographical works including the 1778 Geographie Comparee, the 1779 Atlas Universel, and the 1801 Cours Complet de Cosmographie, de Chronologie, de Geographie et d'Histoire. He is known to have worked with Conrad Malte-Brun, Ambrose Tardieu, Peter Simon Pallas, and other important cartographic figures of his period. Edme Mentelle is frequently erroneously confused with Francois Simon Mentelle, another French Geographer who worked with Cassini on his historic survey of France.


Pierre François Tardieu (1711 - 1771) was a French engraver and mapmaker active in Paris during the middle part of the 18th century and a member of the large and prolific Tardieu family. Several members of the family established themselves as engravers, and, for over 200 years, the family produced works. Pierre Francois Tardieu was born around 1711 in Paris, son of Jean Tardieu. His uncle, Nicolas-Henry Tardieu, taught him the art of engraving. Pierre was a general engraver whose work was not limited to maps but also included historical and genre works. Many of his maps are extremely significant and include some of the finest French productions of the period. Tardieu had his office at Rue de al Corderie, Paris. Tardieu was married to Marie-Anne Rousselet (1733-1826), whose family included the engraver Gilles Rousselet and the sculptor Jean Rousselet. It is highly likely that Pierre Francois Tardieu was succeeded by Pierre Antoine Francois Tardieu, who is also possibly his son, as the latter continued to engrave under the P. F. Tardieu imprint well after the former's death.


Pierre Jean (1754 - 1829) was a French engraver, publisher, print seller, and map maker active in Paris in the late 18th and early 19th centuries. Jean entered the engraving and printing business on June 7 of 1784 when he married the daughter of Louis-Joseph Mondhare, a prominent French engraver, print seller and map publisher. Mondhare changed the name of his firm to Mondhare & Jean. Under Mondhare, for about 12 years, Jean mastered the in-and-outs of the engraving and map publishing business. Mondhare retired in 1796, leaving Jean his business and printing plates. Jean subsequently continued to publish on his own account, as Chez Jean, from the old Mondhare & Jean offices at 32 Rue Saint-Jean de Beauvais.