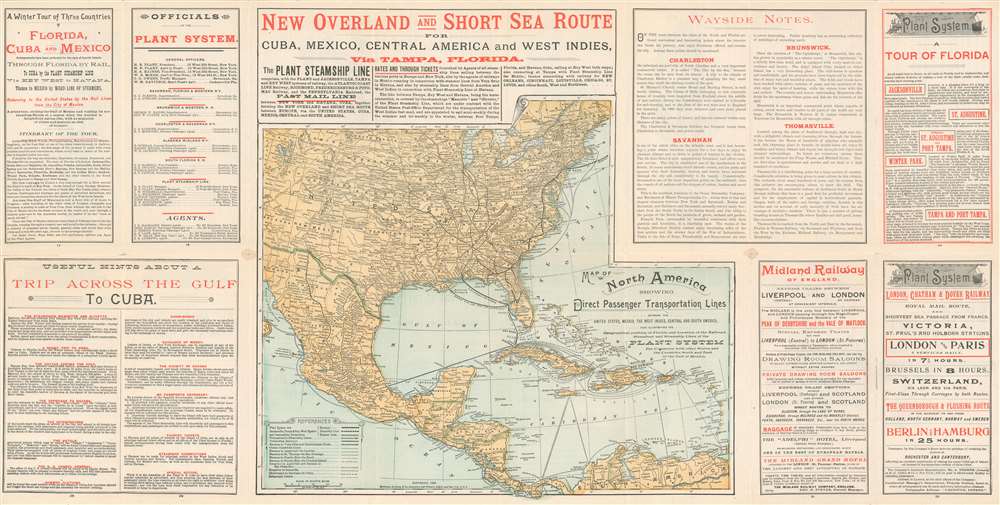 This is an 1889 Matthews, Northrup, and Company map of North America promoting Tampa, Florida as national transport hub for both land and sea routes. Known as the Plant System, the map depicts a vast transportation network centered on Tampa, but extending from Nevada and Idaho to the Windward Islands and from Quebec to northern South America. Thick black lines mark Plant System rail lines along the East Coast from New York to Tampa, with thick dashed lines illustrating Plant Steamship lines from Tampa to Mobile, Alabama and from Tampa to Havana, Cuba via Key West. Thinner black lines highlight affiliated rail lines in the central U.S., while even thinner lines illustrate the rest of the rail network spreading out like a spider's web across the country. Other steamship routes throughout the Caribbean are also included, rendering apparent that travel is possible between all the islands in the West Indies, Mexico, and Central and South America. Advertisements promoting worldwide travel flank the map on both sides, touting the fact that travelers can purchase tickets to any of the locations illustrated on the map plus several different cities in Europe, including London and Paris, from Plant System agents.

One such advertisement, situated in the upper left corner, promotes 'a winter tour of three countries'. This tour, which would leave from a city in the Northeast, such as New York or Washington, D.C., would guide a traveler down the east coast of the United States, where they could potentially stop at any number of cities, before boarding a steamer in Tampa to Havana. From Havana, this intrepid soul would board another steamer across the Caribbean to Veracruz, Mexico, where they would board a train that would take them to Mexico City. Once they decided they were ready to head back to the States, a train would take them to one of three stations along the Rio Grande River, which forms the border between the U.S. and Mexico, where they would board another train for a trip east through the American South, completing a circle around the Caribbean itself.

This map was created by Matthews, Northrup, and Company for the Plant System and published by the Plant System in 1889. We are aware of one example in institutional collections which is part of the collection of the Miami-Dade Public Library System.