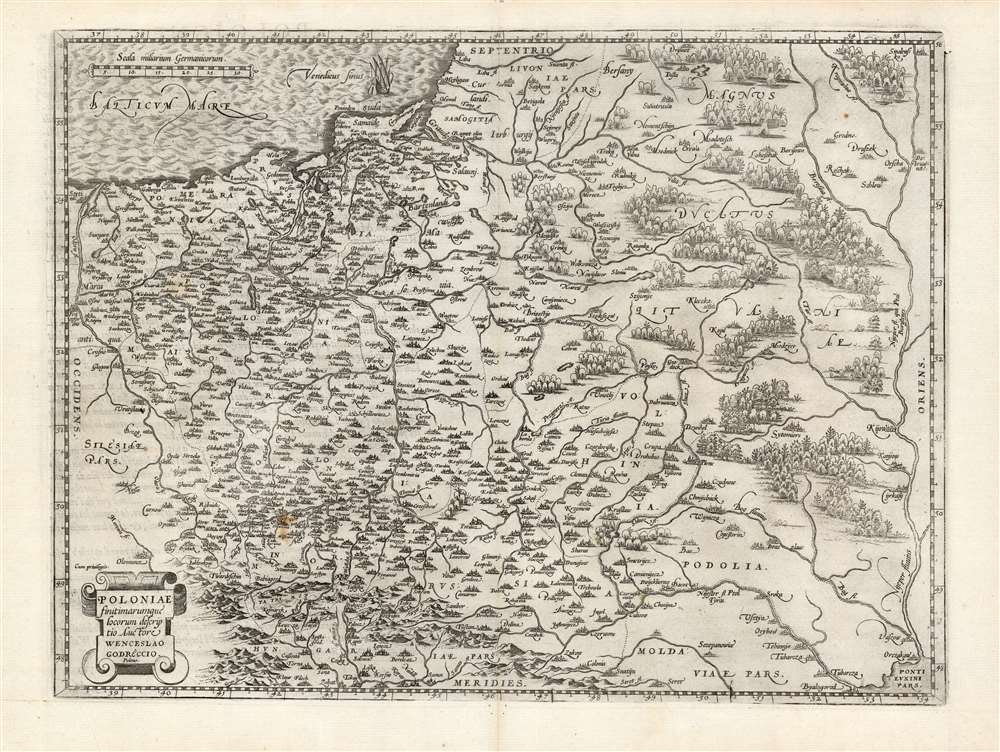 This is Abraham Ortelius' 1581 map of Poland, based on the c. 1556-58 Grodziecki. The map reaches from Szczecin and the Oder River in the west to the Dnieper River, thus embracing much of Ukraine as well as part of Russia and the Baltic. Mountains and forests are shown pictorially.

This map was engraved for inclusion in Ortelius' Theatrum Orbis Terrarum in 1579. The present example conforms typographically to the 1581 French text edition, of which van den Broecke estimates there were four hundred printed. Nine examples of that edition of the book are listed in OCLC. The separate map is well represented in institutional collections.


Wacław Grodziecki (or Grodecki) (c. 1535 - 1591) was a Polish Catholic priest, canon, and cartographer. He was born to the family of a Starost, a community elder; he studied mathematics and philosophy at Krakow Academy, and between 1556 and 1558 studied further at the university in Leipzig. He is thought to have travelled to Rome in 1558 and to have visited Prague in 1561. Having returned to Krakow, he graduated with a master's degree in liberal arts in 1564. Thereafter he became canon in several towns successively: Wrocław, Olomouc and Brno, where he and his brother Jan established a Jesuit college. In 1572, he became Olomouc's bishop. During his time in Leipzig, Grodziecki drew a map of Poland, published around 1562 in Basel; it is thought to have been derived from the 1526 map of Bernard Wapowski, but as virtually all of Wapowski's maps were destroyed in the fire of Kraków in 1528, Grodziecki's work was long the best map of Polish lands. It provided the model for Ortelius' 1570 map, to which Grodziecki's fame can largely be ascribed. Learn More...

Excellent with a sharp strike.