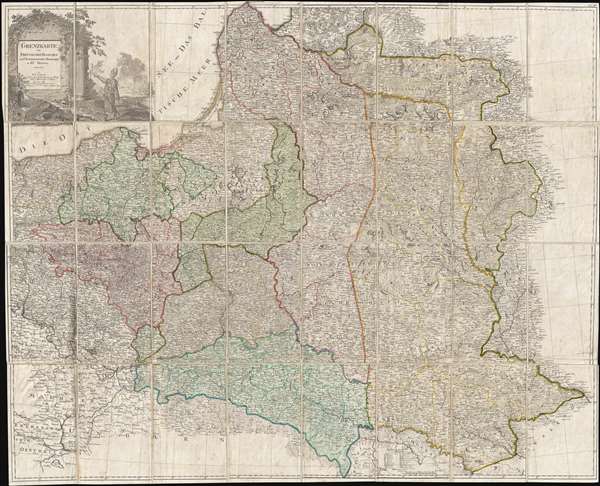 The largest and best map of Poland following the Third Partition.

An exceedingly rare map of the great significance, this is Daniel Friedrich Sotzmann's 1796 large-format large-scale map of Poland prepared immediately after the 1775 Third Partition of the Polish-Lithuanian Commonwealth. When Sotzmann made this map, he was the official geographer oh the Royal Prussian Academy of Sciences in Berlin with access to the most up to date cartographic information, finest engravers, and royal patronage. There can be no doubt that this is the largest and best map of Poland following the Third Partition. We have found few bibliographic references to this chart, but it's date, size, association with the Royal Prussian Academy of Sciences, and rarity suggest that is was most likely an official rather than commercial production intended for administration of the partition.

The map covers from Brandenburg to Russia and from the Gulf of Livonia to Moldova and Hungary, including all of Poland and the former Grand Duchy of Lithuania, parts of Prussia, Russia, Livonia, Hungary, Germany and Austria. The whole is beautifully engraved with a large allegorical cartouche in the upper left corner. Color coding defines the regions annexed in all three partitions. Cartographically it is derived from Prussian financed surveys completed between 1791 and 1795.

The Partitioning of the Polish-Lithuanian Commonwealth

By the mid-18th century Poland, due to an inefficient and corrupt internal bureaucracy, had lost much of its autonomy to its aggressive and powerful neighbors: Russia, Austria and Prussia. The First Partition occurred in 1772 with Prussia occupying Poland's long coveted western territories, Austria seizing Galicia, and Russia taking part of Livonia. In the aftermath of the First Partition, the Second Partition was almost inevitable. Poland allied with Prussia to thwart the ambitions of Russia in the east. This, along with a number of other factors, lead to the War in Defense of the Constitution between Poland and Russia. Largely abandoned by their Prussian allies, Poland could not hope to stand against the powerful Russian military. Poland's defeat resulted in the loss of nearly 50% of its remaining territory to Russia and Prussia, who signed an accord in 1793. The Third Partition of Poland would dissolve what remained of the reduced Polish-Lithuanian Commonwealth, ending Polish autonomy in the 18th century.

This map was drawn and engraved by D. F. Sotzmann and published in Berlin in 1796. It is today quite rare, with examples in the Library of Congress, Harvard, and at a couple of German libraries. There is no sales history and we are aware of no examples in private hands.

Daniel Friedrich Sotzmann (April 13, 1754 - August 3, 1840) was a German geographer, surveyor, draftsman, and commercial cartographer active in Berlin during the late 18th and early 19th centuries. He is considered the father of Berlin commercial cartography. Sotzmann was born in Spandau, the son of a pewterer. He studied engineering in Spandau and taught himself surveying. From 1772 – 1773 he worked as a draftsman, making maps under the direction of the cartographer Carl Ludwig Oesfeld (1741 - 1804). Afterwards he became a civilian conductor at the Kgl. Immediate Construction Commission in Potsdam, a position which he held until 1778. In 1778 he took a position in Berlin as an official in the General Tobacco Administration under Minister Count von der Schulenburg-Kehnert. Around this time, he mastered engraving and in 1783 issued his first maps, among them a plan of Gdansk and an early map of Post-Revolutionary War United States. This began an intense period of map publishing. In 1786, at 32, he joined the Prussian Royal Academy of Sciences, succeeding Johann Christoph Rhode as the that organization's official geographer. He made his first globe in 1791 as a counterpart to Johann Elert Bode's (1747 - 1826) famous celestial globe. He issued his first atlas in 1795-96. Later he took a position with the Royal Prussian Statistical Bureau and after 1816, then Prussian State Survey. Like many engravers of the period, his eyesight began to go bad, forcing him to retire by 1825. In all, Sotzmann was one of the most important German cartographers in his time . He developed trend-setting representations for small-scale cartography. Through Sotzmann's connections to state and scientific agencies, his publications in terms of reliability, wealth of information, and accuracy surpassed all other contemporary Prussia publications. In addition, he produced several seminal cartographic works focusing on the Americas and in particular the United States. Sotzmann was survived by a son, Johann Daniel Ferdinand and daughter, Johanna Philippine. He died of old age in 1840.