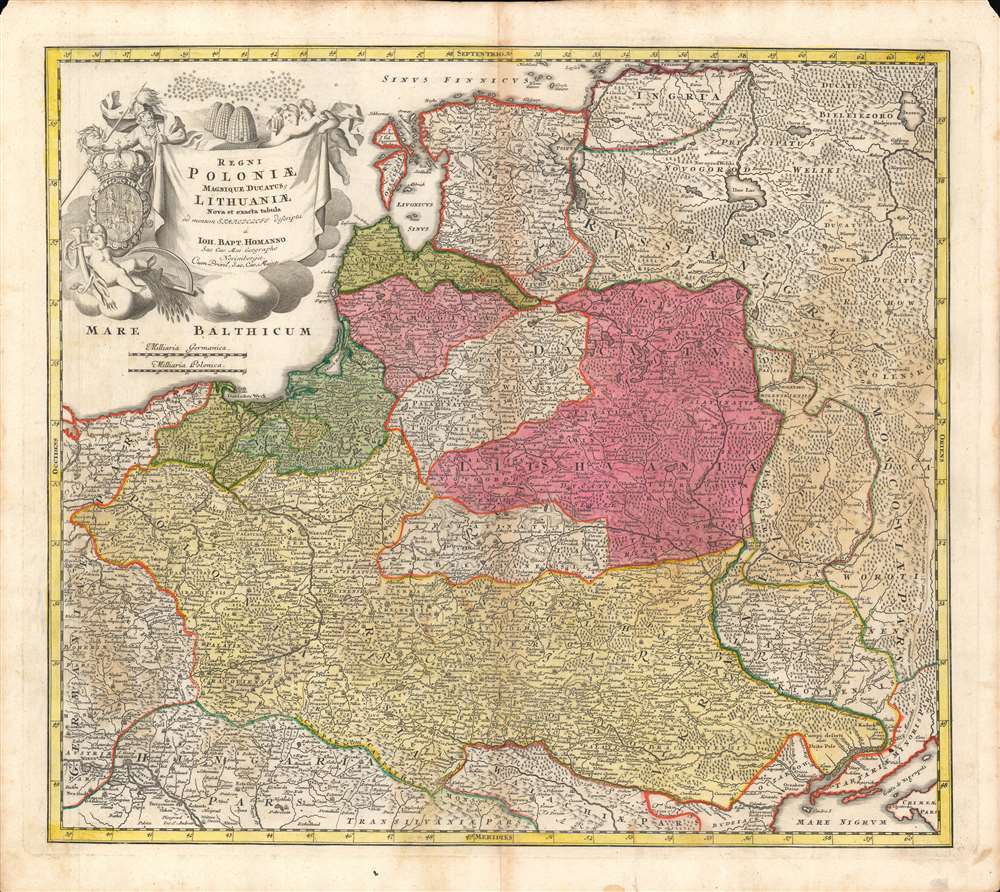 The shifting fortunes of empires in Eastern Europe.
$600.00

Here is a fine example of Johann Baptist Homann's c. 1720 map of the Polish-Lithuanian Commonwealth, covering most of Eastern Europe. It was produced during a transition in the relative balance of power in the region, with Poland-Lithuania itself, Sweden, and the Ottoman Empire waning, and Russia, Prussia, and Austria on the rise.

The lands of the Polish-Lithuanian Commonwealth are displayed, along with portions of neighboring territories belonging to the Russian and Ottoman Empires, as well as lands under the rule or influence of the Habsburgs. Homann wisely amalgamated the dozens of small and micro territories of the German lands into 'Germaniae Pars.' Rivers, lakes, mountains, forests, settlements, and major fortifications (such as those at Lublin and Krakow) are indicated. An elaborate cartouche with a coat of arms appears at top-left. Scales are provided in German and Polish miles, while Tenerife is employed as the prime meridian, an early example of its use in a Homann map (his Grosser Atlas, published in 1716, had set off a small revolution in cartographic methods).

The fortunes of the Polish-Lithuanian Commonwealth changed quickly in the 17th-18th century, from a cultural and territorial peak in the early-mid 17th century to a period of crisis and instability. Rebellions and wars, especially with the Ottomans and Russians, sapped the county's finances and attention. The situation improved somewhat under the leadership of King John III Sobieski in the late 17th century, crowned by his decisive defeat of the Ottomans outside Vienna in 1683, but problems resurfaced after his death. In the following decades, both Poland-Lithuania and Sweden would decline as powers in northern and eastern Europe, to the benefit of Russia and Prussia.

This map was produced by Johann Baptist Homann around the year 1720. Due to its multiple plates, states, and printings, there is wide variation in the date assigned in catalog listings and establishing an accurate census would be nearly impossible. The inclusion of the royal privilege under the title indicates a date between 1715 and 1730. The presence of St. Petersburg, just inside the border at top towards top-right, also suggests a date in the 1710s or 1720s (other, likely later, states of the map present St. Petersburg as a fortress, similar to the cities mentioned above).