1873 Colton Map of the Arctic or North Pole 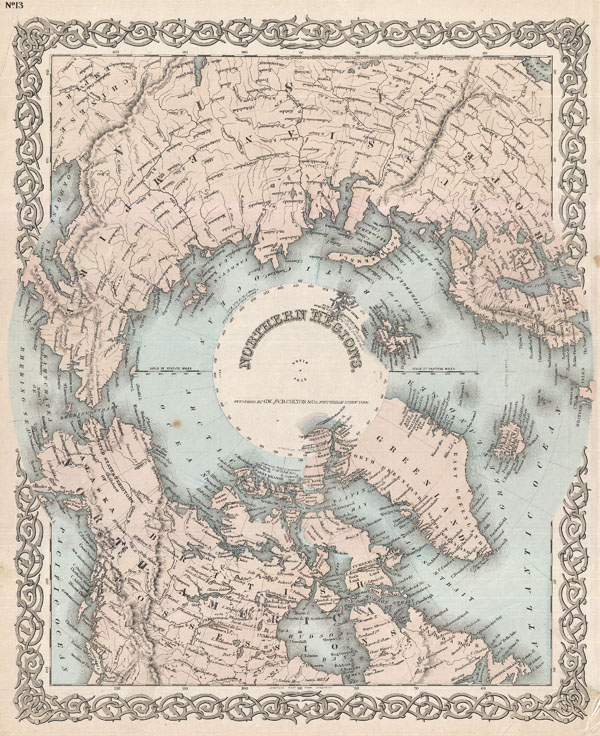 1873 Colton Map of the Arctic or North Pole

One of the rarest variants of Colton's Arctic map.

A rarely seen variant state of Colton's map of the North Pole or Arctic. Covers from Lake Baikal, the Hudson Bay, the British Isles and Kamchatka north to the Pole. Generally gives an excellent overview of the state of Arctic exploration and discovery to about 1873. While Colton rarely updated his copyrights he did update his maps to reflect the most recent political changes, explorations, and discoveries. Colton's mapping of the arctic, first published in 1855 and subsequently updated though the 1870s, provides a valuable record of arctic exploration. This particular example, ostensibly very similar to the 1872 edition, features a number of notable updates around Peterman's Land, Franz Joseph Land, and northern Greenland. Identifies the 'United States Territory of Alaska,' a curious convention common to Colton maps but rarely seen elsewhere as Alaska did not officially take on 'territory' status until the 1880s. Lake many of the later editions of Colton's 'Northern Regions,' this example is exceptionally rare and features a full color wash. Most previous editions of this map were in black and white. Prepared by G. W. and C. B. Colton as map no. 13 in the 1873 edition of Colton's Atlas of The World. Published from Colton's 172 William Street office in New York

Very good condition. Some minor repairs and creasing to outer margins. Text on verso. Else clean.