1636 Jansson Map of the North Pole or Arctic Regions 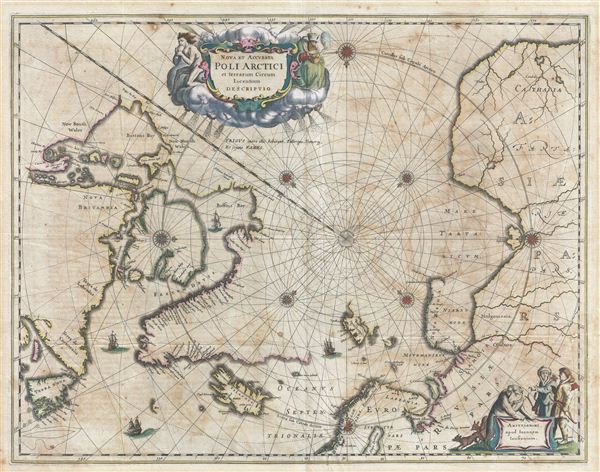 1636 Jansson Map of the North Pole or Arctic Regions

A first edition example of Joannes Jansson's important 1637 map of the North Pole or Arctic. Centered on the North Pole, this map extends southwards as far as James Bay, Newfoundland, Drontheim (Trondheim), and Lapland. It includes embryonic mappings of Greenland, Baffin Bay, Spitzbergen, and Nova Zembla as well as parts of Iceland, Siberia, Northern Russia, Canada, Norway, Sweden, and Finland. The unexplored northwestern parts of America are conveniently hidden by an allegorical title cartouche. Another cartouche in the lower right quadrant features stylized Arctic peoples, a polar bear, and two foxes.

One interesting feature of this map is its attempt to include rhumb lines. While common on more traditional maps, incorporating rhumb lines into a polar map is a logistical challenge due to the curvature of the earth. The present example solves this by replacing the traditional straight rhumb lines with a series of elaborately curved rhumbs – producing an impractical though highly decorative effect.

This map was first issued in the Appendix of the Latin edition of Novi Atlantis. It was subsequently issued five separate states and was republished until about 1694 when it was replaced by more advanced maps. Jansson's map of the Arctic was the model on which most Arctic maps were based well into the early 18th century. The current example, from the first edition plate, corresponds to the 1650 Latin edition of the Atlas Novus.

Good. Even overall toning. Centerfold repair limited to lower margin. A couple of minor marginal scrapes not affecting printed area. Some transference throughout. Some foxing.