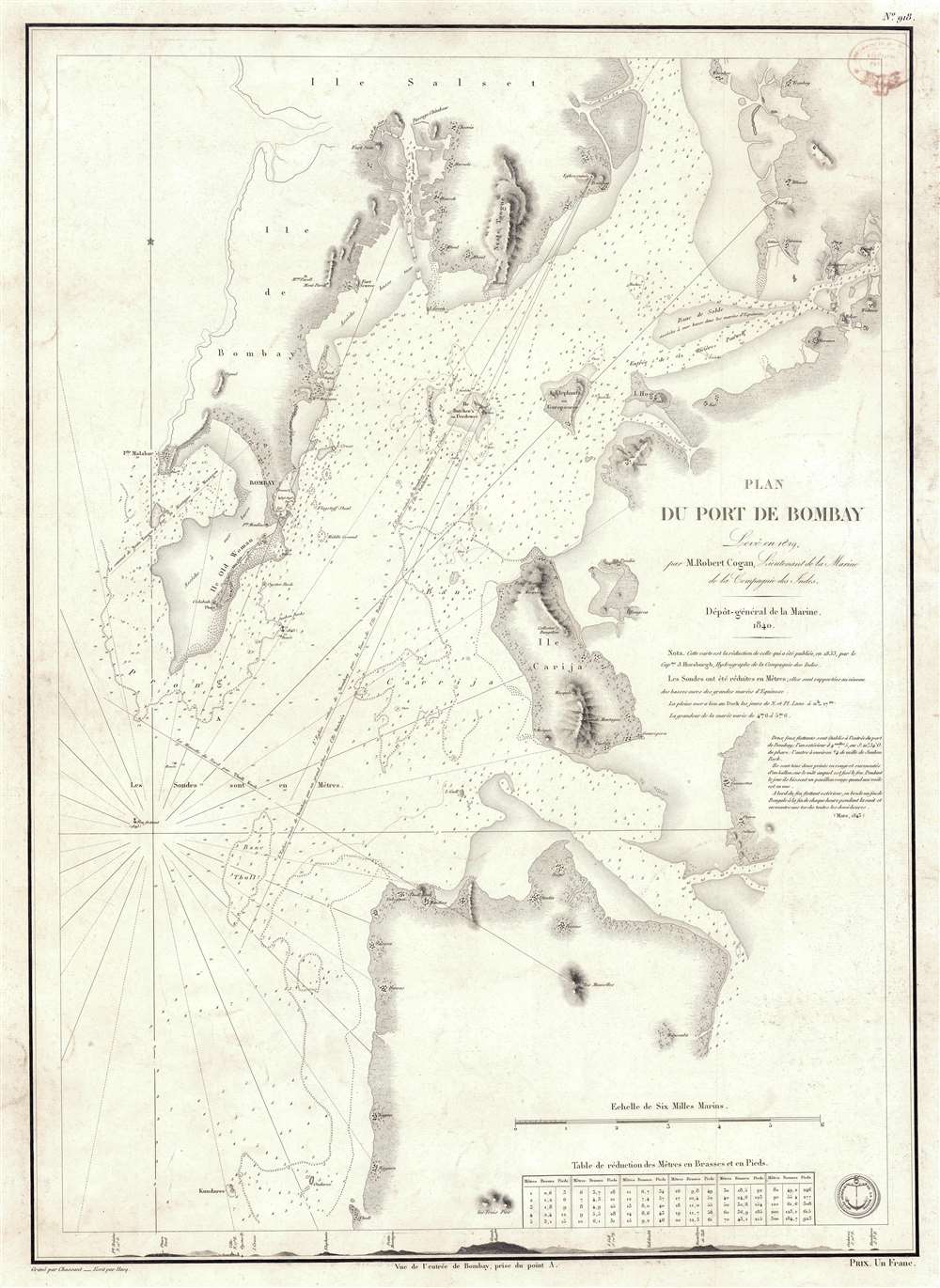 This is a rare 1840 / 1843 nautical chart or maritime map of Bombay / Mumbai harbor, India. The map covers from Salsette to Kundaree Island. Detail focuses heavily on the inner harbor, where thousands of depth soundings in meters and trigonometric survey lines are included. This chart, compiled from the survey work of India Navy Lieutenant Robert Cogan represents the first major scientific survey of Bombay Harbor since the late 18th-century work of Captain John Watson.

Looking at the Map

Mapping here is focused on the harbor of Bombay. The Indian ocean side of the island is simply ghosted in - suggesting incomplete survey work. The harbor-side is mapped in detail with the British stronghold, Fort George, clearly represented. To the north of the Fort, the Indian town of Bombay is also evident. Cartography extends inland little beyond the coast underscoring that the inland parts of Bombay Island were at this time still largely mangrove swamps and tidelands. The lighthouse at the tip of 'Old Woman' is identified, as are a number of Indian villages on both sides of the harbor.

Historically, the map marks the beginning of a major period of growth for Bombay. In 1830 the Suez-Bombay Steamer was inaugurated, shortening the transit from Europe to India from 5 to 2 months. The steamer led to a significantly greater movement of people and goods, increasingly Bombay's significance as a port and trade mecca. The opening of the Suez Canal about 30 years later, only increased Bombay's significance, transforming it into a major city and the gateway to India.

The earliest known published map of Bombay is the 1672 John Fryer Map. This map served as the base is for the John Thornton / John Seller hydrographic map of 1685. That map formed the basis for all subsequent maps of Bombay, including the Van Keulen, to the mid 18th century. In 1768, Captain William Nicholson was commissioned by the British East India Company to resurvey the increasingly busy harbor. His great chart, a massive eight sheet work, was published by John Spilsbury in 1768. That map now exists in only a single incomplete example in the Library of the Greenwich Maritime Museum. Spilsbury's draft fell into the hands of map publisher Robert Sayer, who produced a smaller version of the map in 1778. Sayer's business, including the plates for this map, were acquired by Laurie and Whittle, who issued a new edition, based upon the updated Bombay Marine surveys of Captain John Watson, in 1794. Decades again passed without significant survey work in the harbor. But, in 1829, the British East India Company's Indian Navy commissioned Lieutenant John Cogan to complete a trigonometrical survey of the harbor - which was initially published by James Horsburgh in 1833. The next major survey did not follow until the Admiralty surveys of the 1850s.

This map was surveyed by Robert Cogan in 1882 and first published by James Horsburgh in 1833 as Trigonometrical Survey of Bombay Harbour, but we have been unable to locate an example for comparison. Likely the only surviving example of the Horsburgh 1833 chart is in the British Library, making this French chart the only obtainable example of the 1829 Cogan survey. This map has an OCLC reverence, but no holdings are cited. Nor do examples appear in other catalog searches, making this a once in a lifetime piece.

Robert Cogan (1798 - November 26, 1847) was a British naval officer active with the Indian Navy, the naval arm of the British East India Company, in the early to mid-19th century. Cogan achieved the rank of Lieutenant in Bombay in 1822 and the rank of Commander in January of 1830. From 1822 to 1828 he was assigned to various survey teams on the west coast of India. In 1829 he was assigned to complete a trigonometrical survey of Bombay Harbor - the first serious survey of the harbor since the 18th century. Most survey work by the Indian Navy terminated in 1837 when Sir Robert Oliver (1738 - 1848) became Superintendent of the Indian Navy. Oliver did not understand and had no use for Hydrographic surveys and under his leadership, most survey work stopped. Skilled surveyors working with the Indian Navy, Cogan among them, resigned in protest. Cogan subsequently earned the patronage of the Imaum of Muscat, who contracted him to Captain his warship, the Liverpool. On retirement from naval life, around 1840, he settled in Hammersmith, London. Learn More...