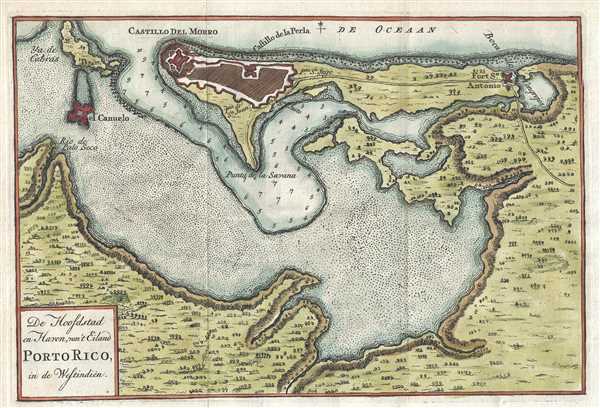 Illustrates the many defenses of San Juan.

This is a 1765 Isaak Tirion map of San Juan Bay and San Juan, Puerto Rico. The map depicts the entire bay and the settlement of San Juan. Several locations are labeled throughout the map, including the San Felipe del Morro Fortress, the Perla Fortress, El Canuelo, and the Fort San Antonio, all of which were tasked with the defense of the settlement. Three doors in the walls surrounding San Juan are also labeled. Depth soundings are included near San Juan, but they stop a small distance from the settlement. Trees and some topographic information are also illustrated.

The San Felipe del Morro Fortress (Castillo del Morro) situated at the mouth of the bay, controls entry into San Juan Harbor. The Fortress successfully fought off several invasions of Puerto Rico over the course of its history and still stands today. It is administered by the United States National Park Service and is open to the public. The Perla Fortress (Castillo de la Perla) has since been demolished, and that area is now one of the many neighborhoods in San Juan. The Fortín San Juan de la Cruz (Fort Saint John of the Cross), labeled here as El Canuelo is a small square fort built across the entrance to San Juan Bay from the San Felipe del Morro Fortress. This fort survived several bombardments, including one by the American Navy during the Spanish-American War, and still stands. It is part of the San Juan National Historic Site, but is unfortunately not open to the public, though visitors can walk around the fort. The last of the four major defenses of San Juan is Fort San Antonio. This fort was constructed to fortify the San Antonio Bridge, which controlled access to the only land route to San Juan. The fort was demolished in 1894 to make room for a new metal bridge.