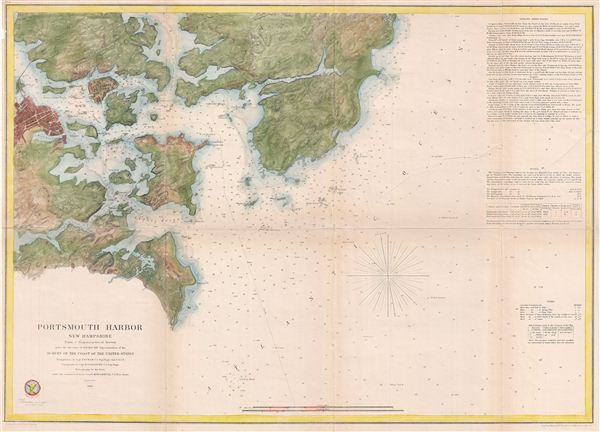 A beautiful example of the U.S. Coast Survey's 1866 nautical chart or maritime map of Portsmouth Harbor, New Hampshire. This map covers the city of Portsmouth, New Hapshire, and its vicinity from Odiornes Point and Sagamore Creek to Chauncy's Creek and Spruce Creek. It includes Great Island, the Navy Year, Kittery Maine, and countless smaller islands. This 1866 map represents the culmination of the Coast Survey's work in the vicinity of Portsmouth. Unlike earlier issues, this example presents rich topographical detail as well as hydrographical data. There are countless depth soundings throughout and the right-hand quadrants feature sailing instructions, notes on tides and light houses, and a wealth of other practical information for the mariner. The city of Portsmouth itself is beautifully illustrated with numerous individual buildings and all major streets rendered.

The triangulation for this map is the work of T. J. Cram. The Topography was completed by H. Stansbury. The hydrography was accomplished by parties under the command of M. Woodhull. Stansbury, it should be noted, had previously completed the first accurate survey of Great Salt Lake in anticipation of a transcontinental railroad and is one of the most important cartographers in American history. Though this chart is a minor production compared to his other pieces, his association with it bears note. This chart was published three years after Stansbury's death, so we can assume that it must have been one of his final projects for the Army Corps of Engineers. The whole was compiled under the supervision of A. D. Bache, one of the most influential American cartographers of the 19th century.

Very good condition. Some wear and toning on original fold lines. Backed with archival tissue for stability.
Looking for a high-resolution scan of this?