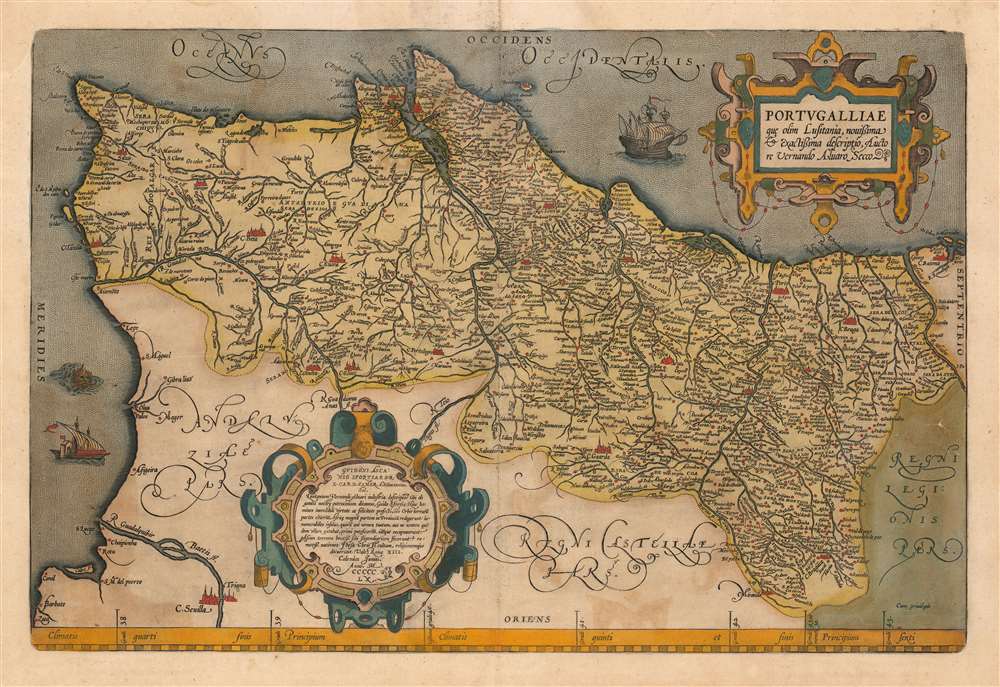 This is an original old color example of Abraham Ortelius' 1570 map of the Kingdom of Portugal, in a Latin edition of 1612. In its first issue it is the earliest acquirable map of that kingdom. The map is oriented to the west, and its composition is balanced and artistic. Ships sail the stippled oceans, and a hirsute monster lurks off the southern coast. The map includes two handsome strapwork cartouches: the title cartouche in the upper right, and at the bottom just left of center, the map's effusive dedication.

Ortelius' source for this map was the Portugal map drawn by Ferdinand Alvares Seco, probably the unacquirable 1565 De Jode issue. Ortelius reproduces not only the geography of the Seco map (including its westward orientation), but its dedication to Cardinal Guido Sforza by Portuguese humanist Achilles Estaço, who would become the cardinal's librarian between 1562 and 1564 (evidently, Estaço's 1561 flattery of Sforza worked). The date of the dedication corresponds to the day (May 20, 1560) when the Portuguese ambassador, Lourenço Pires de Távora, gave the oath of loyalty to the Pope on behalf of the young King Sebastian. The correlation of these dates suggests that the Alvaro Seco map represented an official, perhaps a royal publication. Although Ortelius' edition is not the first printed map of Portugal, it is arguably the most influential. While the Trammezino and De Jode maps of the 1560s are vanishingly rare, Ortelius' map would be the first to be included in a published atlas. Consequently it is through Ortelius' Theatrum Orbis Terrarum that Alvaro Seco's cartography reached a broad audience, and it through Ortelius that it was copied by Hondius and Blaeu throughout the seventeenth century and beyond.

This map was engraved for inclusion in the first, May 1570 edition of Ortelius' atlas and appeared in every edition of that work into the 17th century. This example's additional stippling around the place names in ocean areas identifies it as a third state, according to Van den Broecke. It corresponds typographically to the 1612 Latin edition, published by Plantin. In its various editions it is well represented in institutional collections. Examples do appear on the market, however original color examples grow scarce.


Ferdinand Alvares Seco (fl. 1560) also Fernando Álvaro Seco, was responsible for drafting the first separate map of Portugal. The first printed versions of his work were dedicated to the Milanese Cardinal Guido Sforza, so it is sometimes thought that he was a member of the Sforzas' court in Milan - it is more likely that he was Portuguese, and the map's dedication to Sforza was tendered by the Cardinal's prospective librarian. Virtually nothing is known with certainty about Alvaro Seco beyond his map, which remained the source map for almost every subsequent map of Kingdom of Portugal for over a century. Learn More...

Ortelius, A., Theatrum Orbis Terrarum, (Antwerp: Antwerp) 1612.     Abraham Ortelius' magnum opus, Theatrum Orbis Terrarum, was the world's first regularly produced atlas, which 'set the standards for later atlases . . . It was the first undertaking of its kind to reduce the best available maps to an uniform format.' (Koeman) A modestly-sized work of fifty-three maps in its first edition of May 1570, it was an immediate success: there were three further editions that year, and the work remained in print for a total of 32 editions, the last of which was 1641, well after its author's 1598 death. Ortelius added to his atlas constantly, and by 1595 the Theatrum contained 147 maps. Ortelius is renowned generally as an editor, and indeed much of the Theatrum is compiled from a variety of sources: in such cases, Ortelius was scrupulous in naming his sources. But Ortelius was also a mapmaker in his own right: many of his maps are a distillation of various sources into his own work, and there were many maps - particularly in his atlas of Biblical and ancient history Parergon - which were entirely Ortelius' work. In his role as an editor, Ortelius followed in the footsteps of Munster, whose Cosmographia was, until Ortelius, the best window on the world for the curious European reader. In terms of the artistry of his maps, Ortelius oversaw the first great flourishing of copperplate engraving in the service of cartography to occur in Northern Europe. Ortelius' work provided the model for the atlases of Mercator, Hondius, Blaeu and all their progeny in the 17th century - many of whom were to produce faithful editions of Ortelius' maps in their own productions.

Very good. Some toning and offsetting; reinforced area of oxidation. Else an attractive example with rich, warm original color.