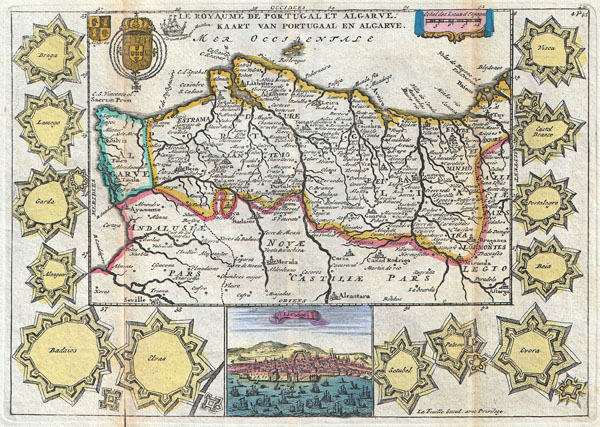 A stunning map of Portugal first drawn by Daniel de la Feuille in 1706. Covers the entire territory of Portugal with the Algarve shown as a separate kingdom. Also includes adjoining parts of Spain. Flanked on either side with 13 fortification plan, from top left: Braga, Lamego, Garda, Alangeur, Bakaio, Elvas, Setubel, Palamo, Evora, Beia, Portalegre, Castel Branco and Visceu. At the bottom, in the center, there is a wonderful little view of Lisbon with a ship filled harbor. The royal crests of Portugal and the Algarve appear in the upper left quadrant along with a detailed many masted sailing vessel. Title appears at the top center in both French and Dutch. This is Paul de la Feuille's 1747 reissue of his father Daniel's 1706 map. Prepared for issue as plate no. 24 in J. Ratelband's 1747 Geographisch-Toneel.