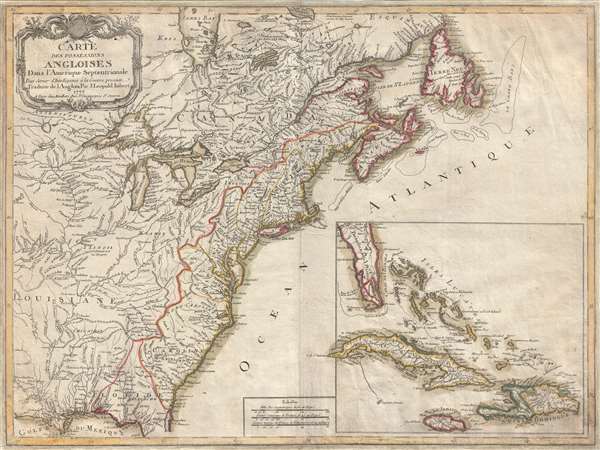 Important map of the British Colonies in North America at the outset of the American Revolutionary War.
$2,750.00

This is the rare 1777 separate issue, old color, first edition of J. Leopold Imbert's important map illustrating the theater of the American Revolutionary War (1775 - 1783). In addition to being a significant map in its own right, this Imbert map underlies its own second edition, one of the most important French maps of the United States ever issued. The present map covers the English colonies in North America at the outset of the Revolutionary War, extending from the Mississippi River Valley to the eastern seaboard from Labrador to Florida. An inset in the lower right details peninsular Florida, the Bahamas, and the Greater Antilles, including Cuba, Jamaica, and Santo Domingo / Hispaniola. The map illustrates states, towns and cities, Indian villages and tribal territory, routes of navigation along the southern coast, and relief.

Imbert issued this map in 1777, just one year after the Declaration of Independence and early in the Revolutionary War. The map was intended to illustrate the Theater of War and capitalize on general French interest in the revolution. Although France had lost most of its North American colonies in the French and Indian War (1754 - 1763), there was some hope that if the British lost their grip on the Atlantic colonies, the French might reassert their claims to Louisiana, the general term for most of the land between the Appalachian Mountains and the Rocky Mountains. Thus, the political and physical geography is slight skewed to the French perspective. Note the unusually warbling western boarder of the English colonies - which firmly isolates them to the east of the Appalachian Mountains. According to Imbert's map France has clear claims to all five of the great lakes as well as the entire St. Lawrence River Valley.

While the first edition is quite rare, this map is better known in the second edition, which was redesigned slightly by Jean-Baptiste Eliot. The 1783 Elliot second edition is one of the first maps to recognize the existence of the United States as an independent nation, as well as recognize the agreed upon boundaries, as stated in Article II of the Provisional Treaty, penned only months earlier.

The general cartography, including the placement of the river systems, mountain ranges, offshore shoals, and more is derived from the work of earlier French cartographers, specially J. B. B. d'Anville and Brion de la Tour.

This map is a separate issue and is rare to the market. It was published in Paris by Chez Mondhare, then located at Rue St. Jacques near St. Severin.

J. Leopold Imbert (fl. c. 1777 - 1778) was a French mapmaker active in Paris during the 1770s. We have been able to isolate no substantial information on Imbert and he appears to have produced a single map, the important Carte Des Possessions Angloises Dans l'Amerique Septentrionale.


Louis-Joseph Mondhare (1734 - August 21, 1796) was a French engraver and publisher of maps, prints and vues d'optique active in the second half of the 18th century. Mondhare was born in Bougy (Calvados) and moved to Paris on or before 1759. He began publishing around 1760 under the Chez Mondhare imprint. On June 7 of 1784, his son-in-law Pierre Jean (1754-1829) joined the business and they changed their imprint to Mondhare & Jean. The Mondhare firm maintained their office in Paris on Rue St. Jacques, at the Hôtel Saumar, a well-known location for print sellers near St. Severin. Later they relocated to 32 Rue Saint-Jean de Beauvais. The firm ceased operation around 1796. Mondhare died shortly afterward in 1799. His name variantly appears on some imprints as Mondar or Mondhard.