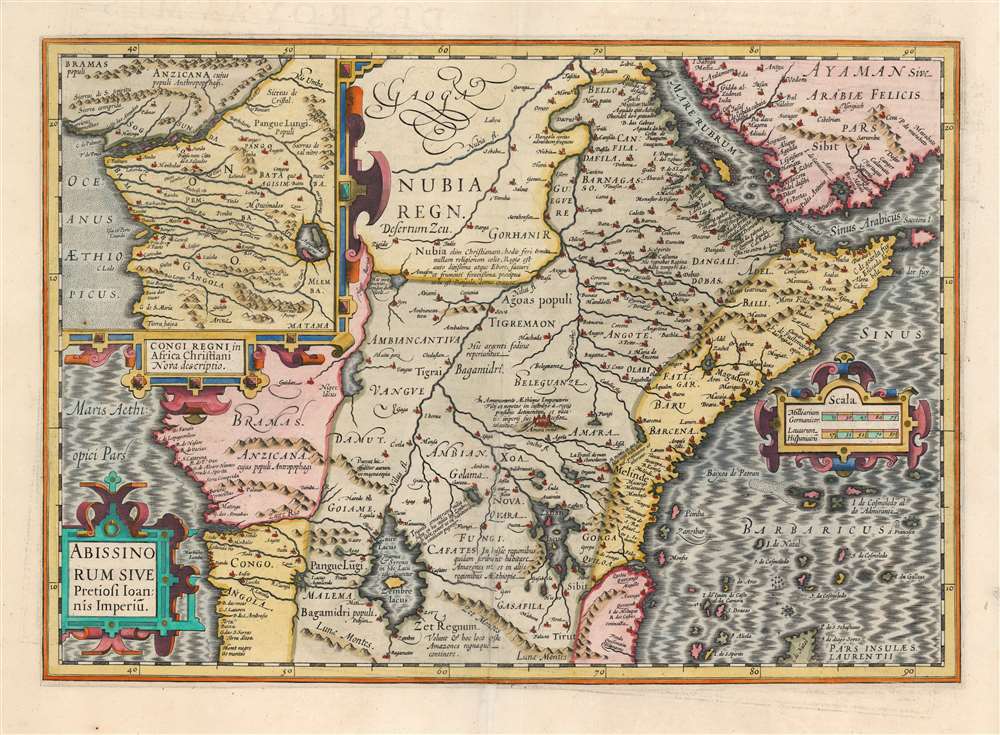 This is the 1606 Jodocus Hondius map of Abyssinia or East Africa, showing the headwaters of the Nile, as assumed in antiquity. The region thus depicted encompasses the apocryphal Christian Empire of Prester John. This example is from the first French text edition of the Mercator / Hondius atlas, dating to 1609. Hondius has drawn heavily on what was still the most authoritative take on the mythical kingdom: Abraham Ortelius' 1573 Presbiteri Iohannis, Sive, Abissionrum Imperii Descriptio.

The legend of Prester John dates to about 1145 when the Syrian priest Hugh traveled to Europe to canvas for a fifth Crusade. Hugh described Prester John as a great Christian king whose empire was located somewhere in India - the idea being that the two great Christian empires, that of John and that of the Pope, would together make war on the Saracens occupying the Holy Land, thus sandwiching the enemy between two indomitable armies.

About 20 years letter a curious letter began to circulate around Europe, purportedly by John himself, wherein the King claimed to be some 562 years old and the ruler of the 'Three Indias'. 'India' at this time referred not just to the subcontinent, but also to much of southern Asia and Africa east of the Nile. It was divided into three parts, 'Farther India' or what is today India and Southeast Asia, 'Nearer India' or the modern-day Middle East, and 'Middle India' or the parts of Africa to the east of the Nile . Having failed to pinpoint the Kingdom of Prester John in Asia, scholars as early as the 14th century began locating John's Kingdom in east Africa. Here they had a bit luck for explorers in the region, starting with the Francisco Alveres of Portugal in the 1500s, soon came into to contact with the Christian Solomonic Kings of Ethiopia or Abyssinia. The Coptic Ethiopian Emperor David II fit the mold of the 'Prester John,' and Alveres believed him to be a descendent of the legendary John, thus firmly entrenching the mythical kingdom of Prester John on maps of East Africa well into the 18th century.

The map follows the Ptolemaic model with regard to the course of the White Nile and its source in two great lakes – the Zaire Lacus (Zembre Lacus) and the Zaflan Lacus, themselves in the foothills of the Mountains of the Moon or Lunae Montes, located at the base of the map. The Blue Nile, which has its source is modern-day Ethiopia, is expressed as a complex network of rivers and valleys bearing little resemblance to reality - though the observer will note that many of the place names, Amara, Tigre, Dobas, and Dangali, do reflect real places and remain in use today.

Pigafetta's Map of the Congo

An insert map, entitled 'Congi Regni in Africa Christiani Nova Descriptio,' shows the lands south of the Congo River, and part of what is now understood as Angola. It was included to illustrate the site of Christian communities, apparently threatened by the presence just north of the Congo of the Anzicana, described here as cannibals. This map, possibly with Ortelius as an intermediary, is a reduced copy of Filippo Pigafetta's 1597 Tabulam Hanc Regni Congo; that map, based on the travels of the Portuguese Duarte Lopes, brings an element of actual exploration to a map that is otherwise a work of imagination. Lopes traveled the Congo basin (partially in an effort to determine the sources of the Nile) and his journeys did lead to the lake pictured on the inset map: 'Aquilunda Lacus', or Lagoa Quilunda in present-day Angola. While Lopes' lake did not find its way onto most contemporaneous complete maps of Africa, Pigafetta's iteration of the map appears as an inset on maps by Ortelius, Hondius, and as a separate map in the Mercator/Hondius pocket atlases.

This map was first engraved by Jodocus Hondius to accompany in 1606 the maps he had acquired from Mercator's heirs in Atlas Sive Cosmographicae Meditationes De Fabrica Mundi Et Fabricati Figura. This example corresponds typographically with the map found in the 1609 French edition, L'Atlas ou Méditations Cosmographiques de la Fabrique du Monde et Figure D'Icelvy. The map, in various editions, is listed in 17 entries in OCLC.