1754 Vaugondy Map of the Liege and Limbourg, Belgium 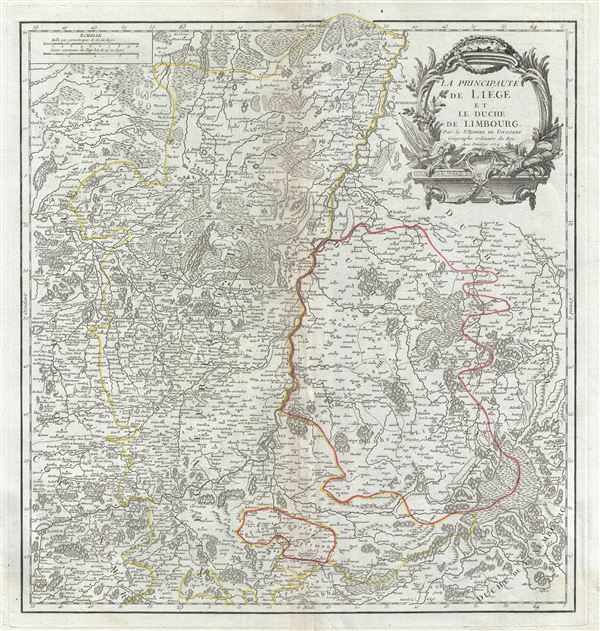 1754 Vaugondy Map of the Liege and Limbourg, Belgium

This is a scarce 1754 map of Liege and Limbourg, Belgium by Robert de Vaugondy. It covers parts of northeastern Belgium and southern Netherlands along with neighboring Germany and map extends from Weert, Netherlands south to Namur, Belgium and east as far as Juliers, Germany. The entire region is depicted in extraordinary detailed, offering both topographical and political information, with forests and mountains beautifully rendered in profile.

The Principality of Liege was a state of the Holy Roman Empire. For a short period between 1789 and 1791, it would become a Republic, and would eventually be annexed to France in 1795. It would join the United Kingdom of Netherlands in 1815 and later part of it would split into Belgium.

A beautifully engraved title cartouche adorns the top right quadrant. Issued in the 1757 issue of the Atlas Universal. The Atlas Universal was one of the first atlases based upon actual surveys. Therefore, this map is highly accurate (for the period) and has most contemporary town names correct, though historic names are, in many cases, incorrect or omitted.

Rumsey 3353.054. Pedley, Mary Sponberg Belle et Utile: The Work of the Robert de Vaugondy Family of Mapmakers, 212.
Looking for a high-resolution scan of this?