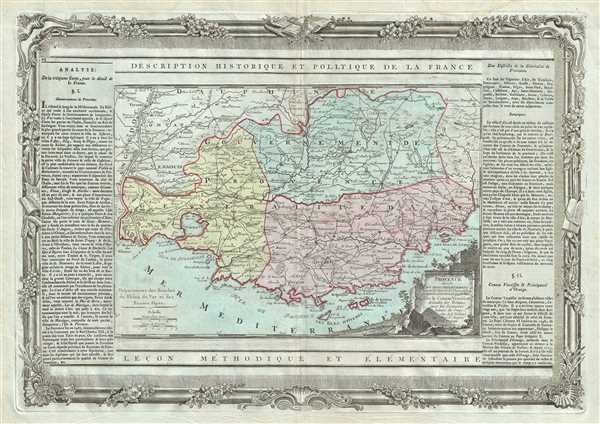 Beautiful map of the French Riviera.

This is an attractive 1790 map depicting the southern coast or the Provence region of France by the French cartographer Louis Brion de la Tour. It covers Provence divided into the three departments of Var, Bouches du Rhone, and Basses Alpes. Color coding divides the map according to region and notes numerous towns, cities, rivers, forests, mountains and other topographical features.

Var, the heart of the French Riviera or Cote d'Azur, includes the resort cities of Cannes, Nice and San Tropez, among many others. This area also houses a number of vineyards. Here you will find the AOC Coteaux varois en Provence, which produces a wide variety of reds and whites. The red wines principally use the grenache, cinsaut, mourvedre and syrah grapes. White wines use the clairette, grenache blanc, rolle blanc, Semillon Blanc, and Ugni Blanc. The northern sub-region of the Bouches-du-Rhone region produces red wines from the Syrah grape and white wines from Viognier grapes. The southern sub-region produces an array of red, white and rose wines, often blends of several grapes such as in Chateauneuf-du-Pape.

A beautifully engraved title cartouche adorns the bottom right quadrant of the map. To the left and right of the map are paste downs of French text with remarks and description of the map. Surrounding the whole is an elaborate decorative border featuring floral arrangements. This map was issued as plate no. 17 in Desnos’ Atlas National de France, bound with the most deluxe edition of his 1786 Atlas General Methodique et Elementaire, Pour l’Etude de la Geographie et de l’Histoire Moderne.