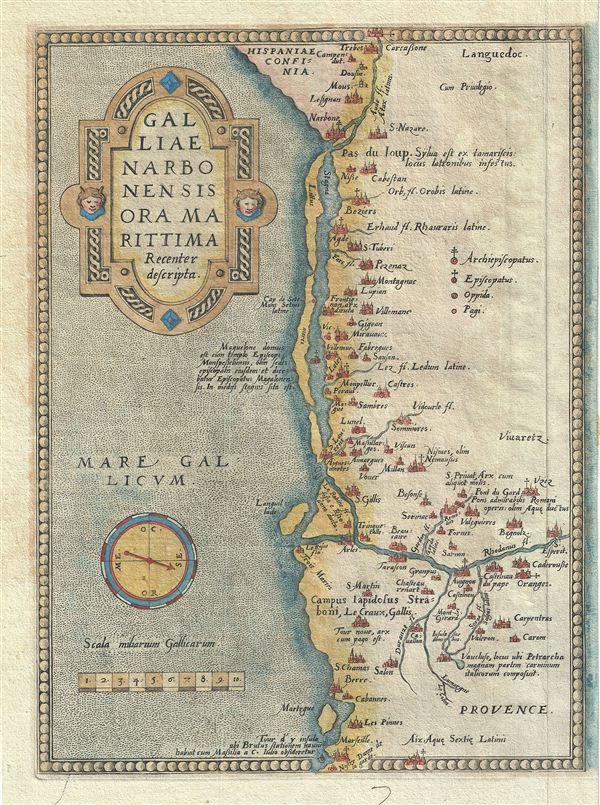 This is a rare 1579 Abraham Ortelius map of the coast of Provence, France. Oriented to the west, this map covers the coastline from Narbonne to Marseille. Vaucluse (marked here just north of Marseille) is the center of wine production in the southern Rhone. Some of the smartest wines in France can be found here. There is also a very strong movement towards the adoption of organic and biodynamic viticulture and natural wine making. The area includes the Cotes du Rhone, Luberon, and Gigondas wine appellations, just to name a few. The red wines principally use the grenache, cinsaut, mourvèdre and syrah grapes. White wines use the clairette, grenache blanc, rolle blanc, Sémillon Blanc, and Ugni Blanc. The map features a decorative title cartouche in the upper left quadrant. Shows the region in wonderful detail with attention to cities, rivers, villages and other topographical features. Published in Antwerp by A. Ortelius in 1579 for issue in his seminal atlas Theatrum Orbis Terrarum.

Good. Overall toning. Text on verso. Unsual color work to the right of the map's border.
Looking for a high-resolution scan of this?