1753 Vaugondy Map of the United Provinces of Netherlands 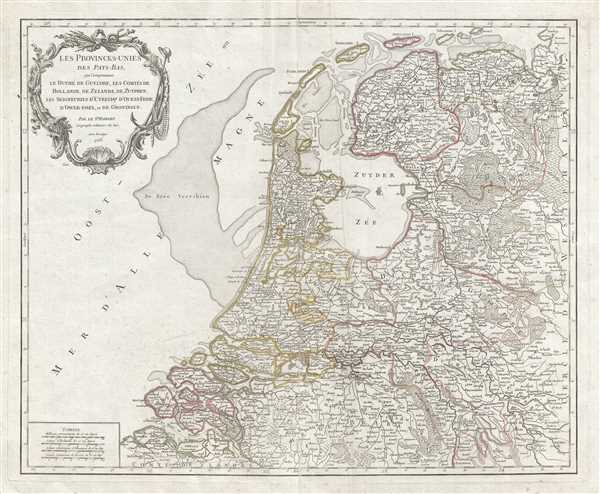 1753 Vaugondy Map of the United Provinces of Netherlands

Decorative map of the Holland or The Netherlands.

This is a scarce 1753 map of the United Provinces of Netherlands by Robert de Vaugondy. It coves what is now northern Netherlands from Norden, Germany south to Middelburg and inland as far as Moers (Meurs), Germany. The entire region shows extraordinary detailed, including some offshore features, offering both topographical and political information with forests and mountains beautifully rendered in profile.

The 'Republic of the United Provinces' was officially recognized in the Peace of Westphalia (1648), and lasted until two years after this map was made, when Napoleonic forces invaded and set up a new French client state, the Batavian Republic. After Napoleon's fall in 1815, the Congress of Vienna united these provinces with the Low Countries to the south to form the United Kingdom of the Netherlands. The Netherlands, with the world's first stock exchange, is considered to be the birthplace of the modern capitalist economy.

Rumsey 3353.055. Pedley, Mary Sponberg Belle et Utile: The Work of the Robert de Vaugondy Family of Mapmakers, 228.
Looking for a high-resolution scan of this?